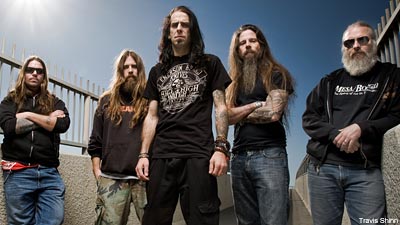 "To be recognized and asked to share the stage with one of the greatest and most influential metal bands of all time is an incredible honor," drummer Chris Adler told Noisecreep regarding another opportunity to tour with Metallica. "It's one of the very few moments in my career when I realized how much we have accomplished with Lamb, and how gracious Metallica has been to take note. We are overwhelmingly flattered and have been having a blast travelling the world with a great bunch of guys." The fall tour marks the third time LOG have hit the road with Metallica, having toured with the mighty M for three weeks in America last December, as well as a seven-week trek in Europe this summer.

Congrats to Adler and his bandmasters on one of the best years of their thoroughly metallic career. Guitarist Mark Morton is sitting out some dates, since his wife is expecting their first child. God Forbid's Doc Coyle will reportedly fill in.