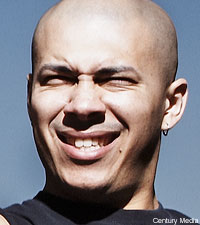 For some reason, people can't go to concerts anymore without hoisting projectiles at the artists performing on stage. Perhaps its part of the groupthink mentality, which posits people will do anything vile when provided with the anonymity of a crowd. But it's lame.

About a month ago, Cradle of Filth guitarist Paul Allender was clocked with an object one fan says looked like a golf ball during the band's set at the Bloodstock Open Air festival in Derbyshire, England. And the band grumbled a bunch and complained online about it. Then, some dude from Attack Attack! was attack attacked by fans, who struck him with some unknown flying object, and nearly started crying.

But when you decide to throw something at Doc Coyle, the formidable, ginormous guitarist for God Forbid, you'd better have medical insurance.

On Sept. 29, while Lamb of God were performing in Dallas, Coyle was beamed with a cup of liquid ... presumably water. And someone nearly died. You see, Coyle's been touring with Lamb of God as of late, on their tour with Metallica. Coyle is standing in for Mark Morton, who is at home with his wife and new child. Someone in the audience took aim and fired the drink at Coyle, smacking him above his left eye, soaking him.

As you'll see in the video, right around the 4:22 mark, Coyle immediately scanned the audience for his attacker, and found him. Coyle yelled something inaudible over the metal onslaught of 'Black Label,' sat his guitar down and made a beeline for the crowd.

The audience cheered, and the band stopped. In the background, you can see frontman Randy Blythe kick it into overdrive, running from the front of the stage the back of it; he jumps down, and runs to Coyle, who at this point is barking threats at his attacker and being held back by security. We can see Blythe ask Coyle what happened, and he gestures to his forehead; then he gestures to the fan, and calls him a "f---ing p---y."

The crowd cheers as Blythe pulls Coyle from the crowd, and they return to the stage. "Rowdy motherf---ers, aren't you?," Blythe says into the microphone, before adding the show was over and that one bad orange ruined everyone's good time. The band is then seen walking off the stage, in solidarity.