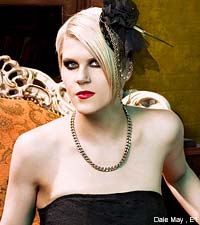 Hard to believe it's been 10 whole years since Kittie's debut, 'Spit,' was unleashed on the metal world and on its way to gold-selling status. Since '00, the cats have endured a record label roller coaster, all the while continuing to churn out brutatstic metal. "It was 10 years ago ... holy s---!" vocalist/guitarist Morgan Lander told Noisecreep, a genuine note of shock creeping into her voice as she put her career in temporal perspective while on tour in France.

"I had my birthday on tour, and I just turned 28, so it's unbelievable." As for the prospect of another decade of Kittie, Lander was optimistic, saying. "Hmm, another 10 years? As you get older, you feel the tour pain a little more and in different spots. Like, 'Oh my lower back is starting to go!'"

And of course, Lander isn't content to say goodbye to music altogether just because of a little back pain. "I think we have a lot left to give and to prove with our music, so I'd like to continue to make music for another 10 years," she admitted. "Sure, there are aspirations to work with other bands, too. I think having this opportunity has opened a lot of doors to do other things. I always love making music and you never truly give it up."

Lander also believes that the young fans who flocked to Kittie in their teens -- who are at the tail end of their 20s now -- have grown up with the band and stayed true. "I have had a lot of people tell me, 'You guys got me into metal and it started me on the path of appreciating other bands and growing and being a fan of Kittie, too,'" Lander said. "For us, it's difficult, since we never had a lot of positive label support after the first album, and some people thought we dropped off the face of the earth, but we continued to make music.

"Some fans have grown with us. With every album, the music is age and maturity-level appropriate. We grew up with our fans. They were 16 when they found the band, which was the age we were when we started the band!"

The band will headline the U.S. with God Forbid in tow this March.