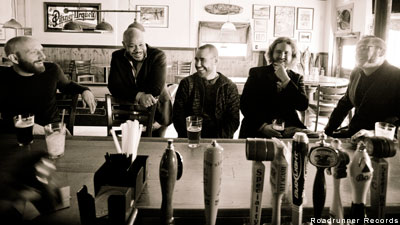 Killswitch Engage launche their 2010 touring schedule with a hometown date at Boston's House of Blues on Feb. 4. The eight-week U.S. headlining tour -- the first trek through in support of 2009's self-titled album -- will feature the Devil Wears Prada and Dark Tranquility as support acts. But despite 'Killswitch Engage' debuting at number seven on the Billboard Top 200 last summer, the band is keeping this tour to mid-size venues, not arenas.

"We've been building and building and building to go into arenas," bassist Mike D'Antonio tells Noisecreep. "We've done a few tours where arenas are all we've been doing. But the economy is not that great right now, and the ticket prices are higher in a huge venue. We decided we'd rather do more shows in smaller intimate clubs, but bring full production. I don't know, it's rough these days, you know?"

D'Antonio says he's not a fan of bigger venues, anyway. "Clubs, that's where all our best shows happen. Plus, we're hoping that people who haven't seen us before will come down. We know our fans will jump at the chance to see us play smaller venues. It will be a super party for sure," says the 36-year-old founder of the Massachusetts metalcore band.

Following the U.S. tour, which ends March 21 in Wallingford, Ct., Killswitch Engage will tour through Japan, Australia and New Zealand. But as far as summer festival dates are concerned, D'Antonio is tight-lipped. "I don't know what I'm allowed to say. We've definitely got -- oh, um, nothing in the U.S. yet -- European stuff. That could change. It's only January.

"I try not to look into it too much," he continues. "Because then I just blurt it out and people yell at me. I like to stay in the dark anyway. Even for tours, I barely know where we're going, but I get excited when I wake up and we're in a spot I don't know."