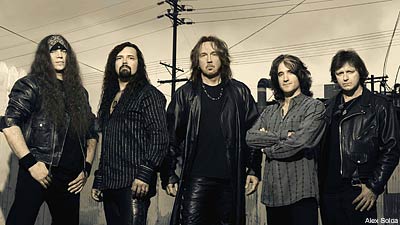 "There wasn't a lot of pressure. It wasn't like back in the day when we had 300 people breathing down our necks and trying to tell us what to do or make us something we weren't," Keel vocalist Ron Keel explains to Noisecreep. "We just wanted to make something we're proud of that stands up to our previous efforts and hopefully the test of time."

The '80s rockers are reunited and ready to tell the world about their new album 'Streets of Rock & Roll.' The album contains 12 new tracks that the band wrote as a group over a period of a few months. When the band members decided to reunite in celebration of Keel's 25th anniversary, songs for the new album came naturally.

"Once we made the decision to move forward and make the album, we spent several months doing intense songwriting back and forth between [guitarists] Marc Ferrari and Bryan Jay and I. It was one of the most creative storms I've ever been involved in," Keel continues proudly.

Marc Ferrari agrees, saying the band collaborated more than ever. "I think it shows on the record. I think we all have something we're really proud of."

While most bands laud their most recent release as their best, all the members of Keel honestly believe this, because they put intense pressure on themselves to come back better and stronger than ever. That's because when the band reunited, they decided everything would be done right: not rushed or half-conceived.

"The pressure was internally generated between of all us," explains Keel. "We wanted to make sure we could deliver something we're really proud of and that we can enjoy ... and hopefully our fans will enjoy it as well."