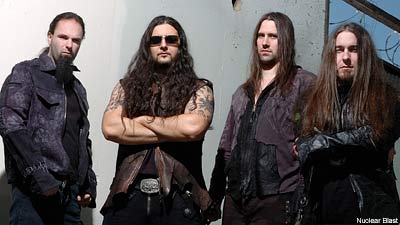 Kataklysm may be from Montreal, but that's not stopping vocalist Maurizio Iacono from opening a pizzeria in Chicago. "I've decided to open [it] with a very good friend of mine, Saverio Donancricchia," Iacono said. "His family has been in the pizza business for over 20 years in Chicago with Albano's Pizzeria in Cicero. They've ranked as a top 10 chowdown joints on 'Top 101 Places in America' by The Travel Channel, so needless to say, opening the number two location has been keeping us very busy.'

As busy as he is with Kataklysm and his side project Ex Deo, Iacono said he was destined to enter the food business because, while music is always on his mind, pizza is in his blood. "Growing up in an Italian family, you always know someone that owns a pizza joint," he said. "My father was a head chef in New York, so I kind of grew up with it. I chose the path of music, but somehow the restaurant business has come to find me."

Iacono will spend as much of his time as he can at the restaurant, but pretty soon he is going to have to start rehearsing with Kataklysm for their run on the second stage of this summer's Ozzfest, which he couldn't be more excited about. "Through good and bad times we've stayed strong and remained a leading force in the underground, but I never in my life thought I would be on tour with Ozzy or Mötley Crüe while being in an extreme band," he said. "One can't help but feel amazed when legends take notice and invite you to participate on one of the world's most important tours.

Fans who bring their Ozzfest ticket stub from the Aug. 17 Chicago date to Iocono's pizza point will receive a discount on their order. The same promotion applies for all national tours that play the region.

Kataklysm, 'Taking the World by Storm'