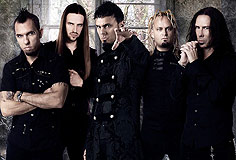 Only mere days away from what was to be the start the first U.S. tour in two years, Kamelot have been forced to cancel. Of course the mighty power metallers are already in the process of rescheduling. During rehearsals in Tampa, Fla., it became clear that frontman Roy Khan was too ill to tour. Currently the illness is unknown, but soon Khan was headed back to Norway to be under the care of his physician. The band planned to solider on, plucking Swedish vocalist Elize Ryd from Amaranthe to fill Khan's presence and voice for the tour. However, they eventually decided against it.

"We all decided that we do not feel right about doing the North American tour as anything less than a 100% Kamelot Experience. We appreciate that many fans have waited more than 2 years for new material and to see us perform together," the band said in statement. "Our new album, 'Poetry for the Poisoned' represents a labor of love from us, and to present it at anything less than full strength seems a disservice to all involved."

They continued, "Though we will suffer financial losses on this late hour cancellation, we still feel it's the right decision for us as a band to make -- we regret disappointing all those who worked so hard to shape this tour, and especially those fans who were still so willing to come through and support us despite Roy's absence. We are humbled by that type of support, and we sincerely hope that our return in full form Kamelot strength will be more reward for your unwavering loyalty!"

Poetry for the Poisoned' is due out Sept. 14