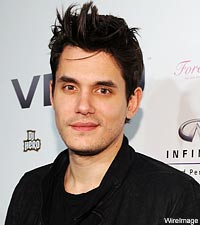 The award winning singer-songwriter just recorded a guest DJ spot on the Sirius XM radio show The Spectrum. During the taped show, Mayer spins some of his favorite tunes and also pulls out his ever-near guitar for a special performance of songs off his new album 'Battle Studies.'

Here at Noisecreep, we're not so caught up into the indie or oh-so-hip rock John tends to favor. Nope. We're more into what he chose to play during his sound check. He covered a little Extreme ('More Than Words'), a little Warrant ('I Saw Red') and a little Skid Row ('I Remember You'). Mayer warns that no one should "test his hair metal acumen!" We believe him!

You can catch the Sirius XM entire broadcast Dec. 16 at 6 PM ET. Check your radio guide for channel numbers.