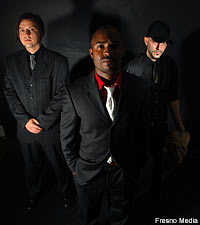 Candiria guitarist John Lamacchia is one of those people who likes to keep busy. This year, he's been juggling the creation of four volumes of Candiria music and side projects.

'Toying With the Insanities' is a four-volume set of rarities and remixes, the first two of which will be released Sept. 9 on Rising Pulse Records. The final two volumes are slated for an early 2010 release. The entire set will be released digitally, while 1,000 CDs of volume one and 300 LPs of volume two will be pressed.

"So far it's been a lot of fun," Lamacchia told Noisecreep. "It's four different volumes. It's filled with remixes and rare tracks; remixes from our friends and peers in underground bands like Dalek, Dub Trio, Kayo Dot, Dillinger Escape Plan and a ton of other artists. And rare tracks from band members' different projects, Candiria and chock full of crazy music and interesting compositions."

Lamacchia said he was initially going to separate the volumes into different topics, but he felt best to diversify on 'Toying With the Insanities,' which takes its name from a lyric on the band's 1995 debut 'Surrealistic Madness.'

"I figured it was a lot more interesting to diversify each volume, write some new music and mix that in there as well," Lamacchia said. "The whole idea is Candiria's never been a band to do anything conventional. I just want to stick with that idea. I think that's what made the music exciting and each record exciting. That's how we're rolling."

The remixes are from the first three albums only, and the rare tracks span Candiria's career.

"It's really mixed up, and I think it's going to be a lot of fun and exciting for fans of the band, and for people who have never heard of the band to begin with," Lamacchia said.

Besides 'Toying With the Insanities,' Lamacchia has been working on a second Spylacopa release, possibility a full length but maybe an EP, he said. He's also working on a solo album by Julie Christmas of Made Out of Babies. He and Christmas just finished scoring the film 'Debut' by French director David Blinn.

"Sometimes you apply so much pressure to yourself, I wonder, 'Why do I do this to myself?'" he said with a laugh. "I'm trying to put out two volumes at once, not like one volume of this Candiria release at once. I just finished the artwork for the first volume. I just mastered the music. Now I have to start on the second volume, and I still have the same deadline date. I think that's the reason why it's been a very interesting project.

"There is this huge deadline I have to meet. It's a lot of pressure but at the same time, I'm really trying to have fun with it."