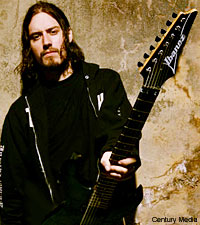 Diecast guitarist John Kita isn't stopping to take a break. Noisecreep caught up with Kita while he was in New York City showcasing with his other band, Once Beloved, a cranium-cracking metalcore act featuring Tyler Stroetzel, the young brother of Killswitch Engage guitarist Joel Stroetzel. Kita actually smashed his middle fingernail - it turned black and everything - while working his day job. After nursing the wound, he woke up the next day to find his hand bloodied, which cost him a trip to the doctor's office, where the good doc actually burned a hole in the remaining nail structure in order to relieve the pressure."

But the question falling off our tongues was: Can he play and play well with a damaged digit? "You be the judge of that," he said, before hopping on stage.

After he motored through a several songs, it was clear the band didn't miss a riff because of Kita's f*cked up finger, which he protected with a BandAid.

Additionally, Kita remains hard at work on Diecast's next record, to be released by an as yet undetermined label, since the band has parted ways with Century Media. "We're writing a new record and we had about ten songs left over from last record that were never recorded. They're not radio style. They're along the lines of everything we did before," Kita hinted. Earlier Diecast material was like a boot to the groin, so this is promising news!