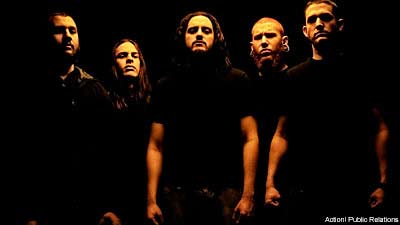 The readers of Guitar World have spoken, and when it comes to 2009 in terms of extreme metal it gets no better than 'Ruination' from Job for a Cowboy. The Glendale, Ariz. band's album beat out last year's releases from Cannibal Corpse, Behemoth, Immortal and Suffocation. This should be no surprise, as Job for a Cowboy have solidified themselves as an unforgettable and undeniable force in metal with their debut album selling 13,000 copies in its first week and 'Ruination' dashing any ideas of a sophomore curse.

On the heals of this honor, the band has announced a headlining tour for the spring to precede work on a new album. Whitechapel and Cattle Decapitation have been tapped as support for the 27-date tour, while Gaza and Revocation will join on select dates.