Today (Nov. 27), on what have been Jimi Hendrix's 70th birthday, Noisecreep wanted to take a moment and celebrate the late guitar icon.

There's no question that without Hendrix's innovative playing style, most of the artists we cover on this site wouldn't exist. Whether it's traditional heavy metal bands like Deep Purple or even the Norwegian black metal groups that Noisecreep frequently features, many of the guitar nuances they've incorporated into their songwriting can be traced back to Hendrix.

Steven Roby is arguably the world's most knowledgeable Hendrix historian. Throughout his career, Roby has been credited for his research in six Hendrix biographies and two Hendrix album reissue packages, plus he also worked for Experience Hendrix, LLC, a Hendrix family-owned company founded by James "Al" Hendrix, the legendary guitarist's father.

Roby recently released Hendrix on Hendrix: Interviews and Encounters with Jimi Hendrix, a collection of some of the best Hendrix interviews, including his final interview given the week before he died.

Noisecreep spoke with Roby to get more insight on the influential guitarist.

First off, how did you gain access to all of these interviews? You must have the world's most extensive Hendrix archive.

I've been a fan and collector since I was 12. I discovered a growing collector's network shortly after Hendrix died, and started assembling my own archives. I've spent the past forty years or so tracking down people that either interviewed Jimi or knew him well. It still amazes me that are some tapes still out there tucked away in people's attics that they just don't know what to do with. I met a guy in Seattle not too long ago who recorded Hendrix in Florida in 1970. It's a tape that a select few have heard. Sometimes it feels like being a detective.

I know you're an expert on Hendrix, but is there any aspect or period in his life that you wish you knew more about?

I really love his pre-fame period, and I'm glad I spent four years of research on my second book, Becoming Jimi Hendrix. I really think it would make a great movie. Hendrix once said his key to success was being stubborn and persistent, and it really paid off for him once he left R&B behind in 1966.

I wish a detailed investigation was done shortly after his death. Many have tried in recent years to assemble the final hours, and that's why we have so many conspiracy theories like that his manger had him killed, or the U.S. Government did it because he supported the anti-Vietnam war movement. Part of the problem is that the lady he was with in the final few hours of his life eventually committed suicide. As bonus material to my book, Hendrix on Hendrix, I've included an unpublished interview with her on my website: steveroby.com. According to her, Jimi said if something should happen to him, his spirit would always be with her. When she asked for clarification, he changed the subject. The mystery remains unsolved.

Do you remember the first time you heard his music?

Like it was yesterday. I grew up in San Francisco during the Haight/Ashbury days, and in 1967 there was a "underground" hippie rock station with the call letters KPMX. They said they were the first station in America to play Hendrix because they got an advance copy from the UK. I rushed right out to my record store after they played it and picked an import copy of Are You Experienced. I then convinced my parents to let me go see him for my 13th birthday. Then in 1970, I saw what turned out to be his final American concert in Honolulu. It's been a career since then. I've published an international Hendrix fanzine, worked for the Hendrix family, answered Hendrix fan mail for the record company, taught a Hendrix college class, and tried to break the Guinness Record for World's Largest Guitar Ensemble by trying to get 3,000 guitar players to play "Purple Haze" in Golden Gate Park. Well, here it is three Hendrix books later, and there doesn't seem to be any end in sight.

Of all the journalists that had the pleasure of interview him, who do you think delivered the best pieces on Hendrix?

I'm particularly found of the women who interviewed Hendrix because he seemed to open up more to them. Take for example Nancy Carter who was doing her master thesis at USC. She wanted to include some quotes from Hendrix, and convinced his management to her to an interview at his hotel. Hendrix discussed all different types of subjects like abortion and the missile defense system with her. And then there's Rolling Stone reporter Sheila Weller who followed Hendrix around during his Woodstock period. Jacoba Atlas did a great job too, and got Hendrix to open up in 1968 about the Black Panthers. It was turbulent time in America with assassinations and riots. Hendrix said he'd like to see the Panthers scare the government to the point that something would change. He said you have to fight with fire if it wasn't going to be done peacefully. Now that's a switch for a guy you thought was all about peace and love. These interviews are all in the book.

Hendrix died in 1970, yet he still gets the kind of magazine and online coverage most newer artists only dream about. Besides his playing, what is it about Hendrix that still resonates with us?

That's a very good question, and one I bring up during my lectures. Music and the music industry has changed so much since the late 1960s. Hendrix was a rebel, and took chances. When he couldn't make it America as a session player or baking up Little Richard, he sought out the bohemian lifestyle of Greenwich Village. A place where he could dress how he wanted, and play his guitar as loud as it could go. Now add that he was an African American, left-handed, and couldn't read or write music. There's a challenge to make it showbiz. Over the decades I've seen many try to copy his style of playing, songwriting, and wardrobe. Several have come close, but nobody seems to take it to the next level. I think Jimi's words were as important as his music, and that's why I've assembled this compilation of his interviews. The internet is full of misquotes by him including one that was said by a UK Prime Minister, not Hendrix. Jimi had a wonderful imagination and that's clearly present in these interviews. 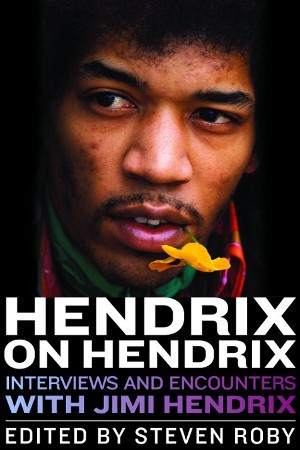 Hendrix on Hendrix: Interviews and Encounters With Jimi Hendrix is available now on Amazon.