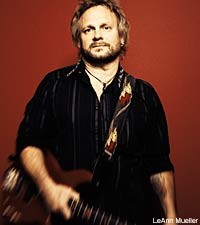 Michael Anthony is the kind of bassist that most hard rock bands would kill for. The former Van Halen, and current Chickenfoot member, not only knows how to anchor a groove, with his fluid bass lines, and tasteful fills, but he also has an almost angelic quality to his vocals, that compliments any singer he's playing with.

David Lee Roth, the original frontman of Van Halen, undoubtedly had the charisma and vocal dexterity to deliver their high-energy material perfectly, but Anthony's melodic backup singing definitely helped land the band a permanent place on the FM dial.

Even though he's in his fifth decade as a recording artist, Anthony isn't showing any signs of slowing down. Chickenfoot, the supergroup that also features Chad Smith (Red Hot Chili Peppers), Joe Satriani and Sammy Hagar (also a former member of Van Halen), had its 2009 debut album go Gold, and they recently announced a Spring release for 'Get Your Buzz On,' a live DVD filmed last summer. The band is also writing songs for their sophomore album. With that kind of packed-in schedule, it's some kind of miracle that Anthony had time to become a guest blogger for our friends at AOL Radio.

The legendary bassist shared a playlist of tracks that were pivotal in his development as a musician in the late '60s and '70s. Unsurprisingly, giants like Jimi Hendrix and the Who make appearances, but the inclusion of lesser-known greats like the Electric Flag and Montrose, makes the piece a must-hear for any serious hard rock enthusiast.