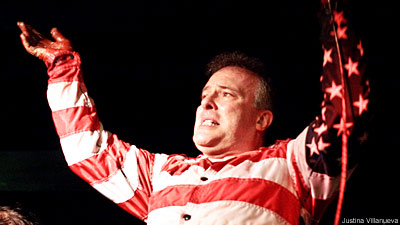 I will never doubt the vivacity of a gray-haired punk again. Not after March 25, when Jello Biafra and the Guantanamo School of Medicine left Brooklyn's Europa in emotional ruins. The intimate Polish nightclub is tucked away in Greenpoint, so it's not like iconic '80s hardcore musicians play there all the time.

Biafra emerged from the crowd wearing a lab coat and latex gloves covered in blood -- it was probably food coloring and chocolate syrup, maybe. He might have said a couple of welcoming words, but this was not your spoken-word former frontman of the Dead Kennedys. This was full form, dancing, acting and singing Jello Biafra.

"It's a very slippery stage. Be careful dude," Biafra warned a crowd-surfing photographer who slid on his way into the crowd.

In the last 25 years or so, a lot has happened in Biafra's life: different bands and collaborations (Lard, the Melvins, Sepultura), a lawsuit and nine spoken word albums. And time has given the musician a lot of steam for discussing the issues he believes Americans should be active about. On this night, he talked to us about the Bush Administration and war crimes, yuppies, feudalism, Obama giving money to the banks instead of homeowners, the prison-industrial complex, and he told us "torture is not OK!" So even though the show wasn't all music, Biafra sure kept the punk ethos alive.

The band played many new songs and a couple Dead Kennedys kickers like "California Uber Allies." The set was about -- maybe even over -- two hours long. After the third encore, Biafra thanked the crowd and asked them for a favor and search for something he lost. "Listen up. I lost a prescription earplug during 'Holiday in Cambodia' when I jumped in the crowd." Oh, the price of stage diving.

Jello Biafra and the Guantanamo School of Medicine's 'The Audacity of Hype' is out now on Biafra's label, Alternative Tentacles.