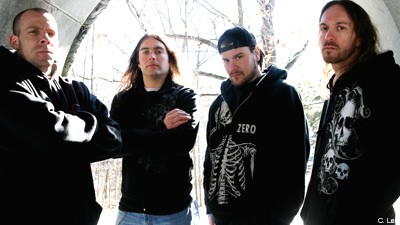 Shadows Fall drummer Jason Bittner is thrilled that after a decade of working on his Burning Human project, the band's music will finally see the light of day via the blood-spattered, death metal opus, 'Resurrection Through Fire,' which was produced by Obituary/Disincarnate guitarist James Murphy, who also laid down more than a few brain-bashing solos on the platter. "After 10 plus years, we've finally released an actual, real CD," the drummer beamed to Noisecreep.

While Bittner is more than happy with his full-time job, he's enjoying the fan reaction as well as his own ability to flex creative muscles and to go balls out and do something completely removed from his main gig. Bittner also said, "Burning Human, to me, is an example, of where I came from, as well as an extension of what I do in Shadows Fall. In a musical setting where Shadows Fall tend to blur the lines between heavy and melodic, Burning Human are the exact opposite. We're always heavy and always brutal. Even though I have to say it's nice to have the melodic side with the Shads, and yes, I like it when kids are 'singing' along with choruses, I enjoy it just as much when the kids are beating themselves up in the pit, like they tend to do at Burning Human shows."

Bashing the skins is obviously Bittner's number one passion and playing in polar opposite projects affords him incredible range and room to groove. "From a drummer's standpoint, I get to play a little more 'outside the box' with Burning Human than I do with Shadows Fall, primarily because a lot of the Burning Human stuff is centered around the drums, whereas Shadows Fall definitely write in a more guitar centered format," he explained. "This is a good way for me to cover all the bases of metal. Plus I get to play with some longtime friends, so it's a win-win situation for me. Hopefully people will dig it." Bittner, you have nothing to worry about. Anyone who likes to bang their head so furiously that they induce a migraine and burst blood vessels in their neck as a result will more than dig Burning Human!