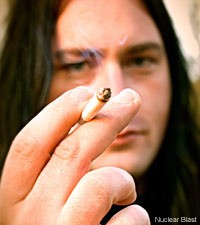 2008 should have been a banner year for tech-death greats Arsis. Last April the band released 'We Are the Nightmare,' a dizzying, forward-thinking death metal album that garnered praise from fans and jaded critics alike. They were also slotted into a series of high-profile tours but things started to fall apart shortly after their album's release. Not only did Arsis cancel a slew of live appearances, they even dropped off tours before they even began. Not surprisingly, band members came and went.

On March 18, vocalist/guitarist James Malone released a statement to the press apologizing to his fans, record label, and booking agents for all of the problems the band has had in the last year. In the statement, Malone cryptically revealed, "Without going into too many details, let's just say that there is no healthy way to lose 100 pounds in 4 months, as I did late last year. To say that I have been dealing with some issues would be an understatement." Almost immediately, the internet was ablaze with speculations that the musician had a heroin problem.

In this Noisecreep exclusive, Malone finally comes clean about the last year and his ongoing health battles.

You recently released a press release trying to explain all of the cancellations and trouble Arsis has had in the last year. But it raised more questions and started more rumors than anything. Would you like to set the record straight once and for all?

This is really tough for me to talk about. I don't even know where to begin in all honesty. I just want to start off by saying that I don't have a drug problem of any kind. I know a lot of people were saying that when I released that press statement. The truth is I've had anorexia for the past year or so. It's not the first time I've gone through it either. When I was in college I struggled with it. I finally got past then I started having a drinking problem that I fought with for years. When I stopped drinking last year, the anorexia problems came back.

I have the kind of personality where I take things way too far. For me it wasn't about weight, it was all about control. I couldn't control everything in my life so I fixated on my weight. At my worst, I weighed 128 lbs and that's crazy for a guy who is 6' 1" tall. I got to the point where I was surviving on 500 calories a day and that's even with the rigorous exercising I was doing at the same time. Last year I lost 100 lbs in the span of 4 months. I think doctors say that a healthy weight loss pattern is about 2 lbs a week so that should tell you how messed up I was.

That sounds like the kind of disorder that touring full-time won't necessarily help.

It was a nightmare. When you're on tour, the food situation is really bad. For someone going through anorexia, you need to control the food intake and that's nearly impossible when you're eating all that horrible stuff out on the road. We were out with Kataklysm and I think I lost 10 lbs in 4 days or something crazy like that. Arsis was out touring in Europe and my girlfriend came out and met us for a day. She was in tears when she saw how bad I looked.

Did the anorexia isolate you from your bandmates?

The condition brought on a deep depression and I already have a seasonal depression to begin with. It has a tendency to make you isolate yourself from anyone like a druggie does. So yeah, it was hard on the band and everyone else around me.

Your original drummer, Michael VanDyne, recently rejoined Arsis. Did that have anything to do with you admitting you needed to take hold of your life?

Michael has gone through this with me in college. Even before Arsis, he knew I had this and saw everything that happened because of it. Yeah, I think the fact that I'm trying to get my sh*t in order makes him want to play with us again. I'm really excited about having him back.

What kind of professional help are you getting for your anorexia?

That's where it gets hard. I play death metal so there isn't exactly a health plan or insurance for people like me. I've looked into a few options and I'll definitely find a program. There are a few things that might work but not having the insurance to help me has made it tough. I'll find something though.

Thanks for taking the time out and opening up about this. I know it's hard but at least you cleared the air.

I'm glad I did it. I just can't believe I poured out as much as I did! It's not something you hear about in the metal world a lot but I know people struggle with it.

The haters will always talk trash.

Yeah, I noticed the reader comments on Lambgoat.com and some of them were actually kind of funny but that's expected when I release a vague statement to the press. I'm OK with that (laughter). Now that I've explained everything, hopefully we could move on.