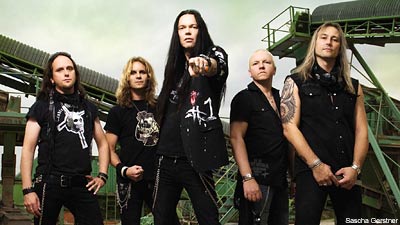 Usually, when a rock journalist asks an interview subject about an upcoming tour, it's just a softball question to get the conversation started. Rarely does the mundane question "Tell me how your upcoming tour came about" evoke strong emotions. Then again, rarely doesn't equal "never."

"The [upcoming] tour happened because we went on this unprofessional, so badly-organized tour with Primal Fear. It was crap. Complete crap," exclaims Fahlberg. "I don't know why they invited us on their tour. First of all, they just wanted to have us there to push around. I guess they just wanted us around so they could kick our asses or something. It was so ridiculous. Boring. Unprofessional."

But wait, there's more! Fahlberg is happy to recount tales of fights between the tour manager and Primal Fear vocalist Mat Sinner. There were alleged issues with sound check as well. Fahlberg says his band never got to do a proper sound check and that Primal Fear would spend up to six hours fixing their sound.

"In Barcelona, we played and we didn't have a sound check because they had sound check for multiple hours. So we started playing and we were seven minutes over. Seven minutes over the time, and we got yelled at the day after in Madrid!" continues Fahlberg.

It was shortly after this that Fahlberg says his band received a call in the middle of the night from the tour manager informing them that Jaded Heart was fired.

Fahlberg says his band was told to not return to the venue or "things would only get worse for Jaded Heart." So ended the Primal Fear/Jaded Heart tour.

Jaded Heart has been around since 1990 and has released nine albums. Fahlberg became the band's replacement singer in 2004. With the addition of Fahlberg came a switch to straight metal. "The fans react differently," Fahlberg says as he reminisces about his first shows with the band. "They heard one thing then all of a sudden we changed the direction of Jaded Heart. At first, we were more AOR and melodic like Bon Jovi, and now we're more metal. I guess the old fans are a little bit ... skeptical. Not all of them. But those who really liked the Bon Jovi thing -- that's gone now. We're all really into metal now. It was for us ... normal to go that way."