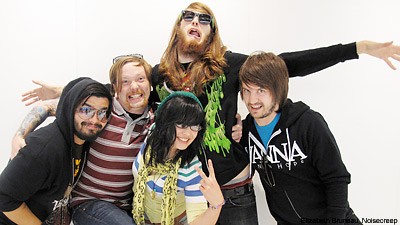 Last week, Iwrestledabearonce swung through the Noisecreep offices, here in downtown Manhattan, and we chatted with vocalist Krysta Cameron and full-bearded guitarist Steven Bradley about life on the road and their new album, "It's All Happening," which hits stores June 2.

The band, who're on the road with Vanna, the Human Abstract, and Oh Sleeper through May 28 in Hollywood, aren't nervous about the album's release, because as Cameron puts it, "I don't care what people think." They are thrilled with the final product, though, from the material they'd written over two weeks for the effort to the record's cover art, a fantastic, colorful collage of chaotic imagery. In fact, Bradley tells us there's even a famous R&B artist who appears on the cover: R. Kelly.

"You've got to really look for him, but R. Kelly is on the album cover," he tells Noisecreep. "Just look for the piss bubbles." And, lo and behold, if you really stare at the collage long enough, you'll see Kelly's head, with little yellow droplets that appear to be falling from his face, and onto a baby -- an homage to Kelly's infamous 2002 child pornography arrest. "Man, maybe I shouldn't have told you that."

Iwrestledabearonce have been touring pretty much non-stop for about a year, and will be confined to a van pretty much through August, with (oddly enough) August Burns Red; that tour, which also features Bless the Fall and Enter Shikari, starts July 10 in Towson, Maryland. What does Cameron do to kill time on the road? She sews.

"I make handbags and clothes, and I sell them to people on the road and through MySpace," she says. "And I'm starting to make jewelry now, too. I've been giving them to all my girlfriends, so they can sport them it around, and I'm wearing it at shows. Girls will come up to me and say, 'Where did you get that?' 'I made it. How much you want to give me for it?'" The self-proclaimed "Renaissance lady" says she may one day launch her own line of clothes or handbags, but her first commitment is to the band.

"I don't know what I want to do aside from the band, but I like to do everything," she says.