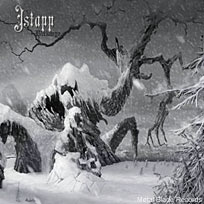 Swedish black metal band Istapp will unleash 'Blekinge' this month on Metal Blade Records, their first for the label. The cover was created by the band's bassist, C. Ashuck von Renvaktar, and features a wintery, gray landscape with a large elephantine tree in the foreground, covered in snow and reaching out with claw-like branches.

The cover art reflects the band's extensive history as a triplet of agents sent by three winter-loving gods to restore the earth back to its completely frozen origins. The sun, you see, is actually an evil star that ruined the pristine frozen tundra of the Earth and gave birth to life and humanity.

"It is imperative that every human walking this Earth gets cured from this thermal plague," the band's biography states, "and join Istapp in the most urgent of wars to finally erase the sun!"

The tree on the cover is actually a rendering of an oak of the band's homebase in Blekinge. "Out of his memories Lord Ashuck himself created a picture of Blekinge and its oak," the band said in a MySpace blog post, "fore-saying the inevitable path this world must wander. It will certainly hurt the eyes of many a sun-worshiper who dare to look upon it."

'Blekinge' will release this sun-denying disc on June 8 in North America, and a few days earlier in Europe.

Filed Under: ISTAPP
Categories: News
Comments
Leave A Comment
Back To Top