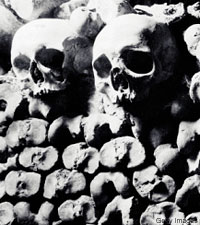 FEEBLE SCREAMS FROM FORESTS UNKNOWN: In a recent interview with a Norwegian magazine, Dagbladet, Burzum mastermind Varg "Count Grishnakh" Vikernes has revealed that he has already written nine songs for an upcoming Burzum album, which he hopes to release next year. 16 years after his conviction for multiple counts of arson and murder (he famously took the life of Øystein "Euronymous" Aarseth of Mayhem with thirty-seven stab wounds to the back), Vikernes has settled into a new life with his wife and young children on a small, isolated farm and promises that the album will be "metal, and fans can expect a real Burzum (album)."

SWEET WAX ALERT: Philadelphia black metal band WOE have announced the official release of the long-awaited LP edition of their debut full-length, 'A Spell for the Death of Man' (on Creeping Vine/Subvert All Media). With an initial pressing of 500 copies on red wax, the album features entirely new cover art courtesy of artist Justin Miller, whose artwork for the CD version has been described as "the final song" by Grigg, as well as a printed inner sleeve. The music comes straight off of a brand-new master taken from the original HD recording. Commented Grigg, "This is the album I recorded, the album I wanted to hear. This is WOE as it was intended."

NEW BLOOD: Shortly after snapping up the excellent Valkyrja, Metal Blade recently made their grimmest signing in years with Sweden's Istapp. The band comments: "We are proud to announce that we have conquered Metal Blade Records. The war against the sun will now proceed with an even stronger force. Our upcoming album 'Blekinge' will hit the earth hard. Prepare yourself for the final avalanche!" 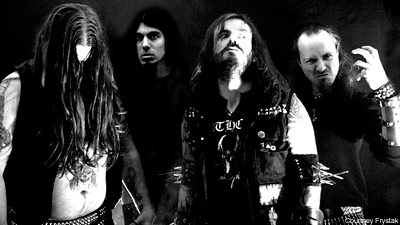 GAMERS BEWARE: California black metallers Lightning Swords of Death (above) were recently invited to take part in the soundtrack to 'Undead Knights,' a new PlayStation game from video game/publisher TECMO, who sought a supremely evil soundtrack to coincide with the game's morbid concept. Their search brought them to Lighning Swords of Death, along with fellow black metal brigade Valdur. "Undead Knights follows a being from hell as he destroys his enemies and turns them into undead soldier-slaves for his army," reiterated LSOD vocalist Autarch excitedly. "Once the premise of the game was presented to us, it was clear that this rare opportunity provided yet another form of media that could be used to spread our message, without sacrificing the principles and ideology of the band. We also take delight in the idea of children all over the world receiving the glory of our hymns while enslaving the dead." Undead Knights will be released this Fall.