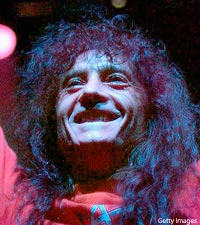 It was announced earlier this week that Joey Belladonna would be returning to the vocalist slot in Anthrax. Though the singer had reunited with the group for a tour in 2005, the members haven't shared the stage together since the conclusion of that trek. Belladonna, while not the band's original vocalist, sang for Anthrax during the height of their popularity and is considered by many to be the quintessential frontman of the group.

The classic lineup of Anthrax will be hitting the European touring circuit this summer and when they return to the U.S. in August, they'll continue work on an album of all new material. In this Noisecreep exclusive interview, Belladonna candidly opens up about his feelings on the reunion with Anthrax and his hopes for the future.

How closely have you followed Anthrax in the last few years?

I've always followed the band. I mean, as close as you can be without knowing everything that's going on behind the scenes. I know there's been a lot of the "is he in, is he out" thing in the past, and I stay out of that, but I've always followed what the band is doing.

Look, Anthrax is always part of what I do musically. So even though I wasn't always playing in the band, it's a huge part of me. During the early days when I wasn't in the band anymore, sure, I didn't follow Anthrax as closely. I kept doing what I had to do, and worked hard. But that went away. It was just in the beginning of the John Bush era.

Did you ever catch them live when Dan Nelson was fronting the band?

All that I've ever seen of the guy singing in Anthrax has been online. I took peaks at some live videos that people put up on YouTube or whatever. I also remember seeing something on one of those VH1 shows once. But I never saw him play in person.

It's not easy filling yours and John Bush's place, but I think he did a solid job.

It's even strange for me right now. People are always going to compare you with other singers that the band has had before. It's a bit of a drag. You are always being judged that way. In the past, I felt like you were judged from song to song or album to album. But now a lot of people are just waiting there, looking to complain.

Before it was officially announced, the Internet was already speculating that you would be returning to the band because you were seen with Charlie Benante and Frank Bello at a Fozzy show together. How long had you and the band been in talks about this reunion?

It actually only took two days. I got a call from someone at the management office, and we got to talking about everything. We just wanted to make sure we were all willing to make things comfortable for everyone. That's the great part about it now. I think we're all ready to hear each other out and make sure everyone is happy with the way things are going.

Now that you are back fronting the band, how fearful are you that the stuff that drove you apart before will come to surface again?

In a real sense, you try to view things from a better place. Like I mentioned before, this time out, if someone in the band needs something, we're all willing to make that person comfortable. I'm definitely not fearful about the negative stuff coming back. I think we've all learned from the past.

What went wrong on the last tour you did together?

On the last time we did anything together in 2005-2006, we were so focused on the tour that we didn't get the chance to really to deal with the issues between us. There were also some short fuses and people not listening to each other. That kind of stuff happens in bands, but we just didn't deal with things properly.

It seems like you have been ready for this reunion for a long time.

Yeah, I'm definitely ready and excited to get out there. In terms of disagreements, I don't think we were ever that bad. Maybe back in the '90s when we first split, but not in the last few years. We just didn't have anything to offer each other, I guess.

Back in the '80s, it sometimes felt to me like you weren't part of the clique in the band. First off, you weren't in the band from the beginning, you're from upstate New York, and the guys are from Queens and the Bronx, plus you even have members who are actually blood related. Did you ever feel like an outsider?

When you join something that is already happening, like I did when I became the singer of Anthrax, it's sometimes tough to fit in right away. So yeah, I felt like an outsider at times. It wasn't always obvious, but it did happen sometimes. But I don't think you have to be from the same upbringing as someone else to fit in with them.

You will be recording new vocals for some of the songs that were supposed to be on 'Worship Music,' the unreleased album Anthrax recorded with Dan Nelson. I spoke with Charlie Benante, and he said that you took a quick pass at one of the songs and it reminded him of 'Spreading the Disease' era Anthrax.

He said that? That's really great to hear! I just tried singing over it for a couple of hours. I actually think it sounds more like 'Persistence of Time' era stuff. But I'm glad he liked what he heard.

When I walk out of a room, I sometimes still have that feeling that people are like, "Maybe we should find someone else," or some crap [laughter]. But it felt good singing that song. It's in my range – the sweet spot for me. I can't pretend to be some other kind of singer. This is what I do best, and I'm not changing for anyone. I'm happy to have the support of the guys in the band. It means a lot to me. I'm excited about the future and I can't wait to get out there.