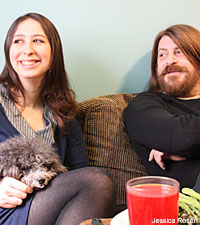 The Scandinavian black metal crisis of the early 1990s, when musicians like Burzum's Varg Vikernes were torching Norway's Christian churches and killing one another over intra-scene disputes, has long fascinated metalheads and beyond.

Filmmakers Aaron Aites and Audrey Ewell have resurrected the topic with their documentary, 'Until the Light Takes Us,' which explores where the scene's key players are today. The duo moved to Oslo, Norway, and spent a few taxing years filming where they were interrogated by police, suffered an apartment fire and endured the death of their bird. Most rewarding, perhaps, was how the pair got to know their subjects extensively without ever romanticizing them.

As for why Aites and Ewell dusted off the 15-year-old topic and made an enthrallingly informative documentary, Audrey Ewell told Noisecreep, "There's a tremendous mythos surrounding these 'evil' figures. People want to know what's actually up with these guys! It's essentially a story about charismatic people who saw a problem and took extreme actions to change the world to their liking. There's a sense of mystery and the 'why' has never really been revealed, and the complex minds involved have never really been given the opportunity to reveal themselves."

Aites and Ewell were drawn to the topic because, as Ewell says, "regardless of what you may think about the musicians and their actions, they boldly attempted to change the world. Who does that anymore? Who even thinks it's possible? Maybe now you can say Obama, but at the time these guys started burning down churches, it was during the ascension of global corporate hegemony. Americanization and globalization were sweeping through Norway. It was kind of reminiscent of the Christian Crusades."

The documentary is being shown at festivals like SxSW on March 19, and the filmmakers are in discussions with distributors for release options.

Filed Under: burzum
Categories: Interviews
Comments
Leave A Comment
Back To Top