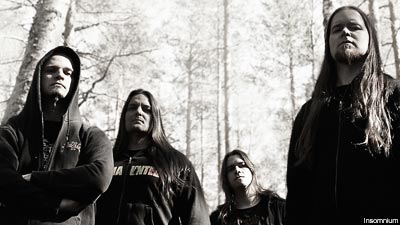 About.com may not seem like the most metal destination on the internet, but it often offers straight-forward interviews, reviews and breakdowns about the genre. Main section writer Chad Bowar recently interviewed Finnish band Insomnium about their new album, 'Across the Dark,' and digs into the meaning and efforts behind the record's creation. "The title reflects the overall lyrical concept on this album," says guitarist Ville Friman. "Getting through the dark times in life."

Friman also discusses horror stories from life on the road. He says, "getting a stomachache and forced to [crap] in plastic bags and dispense them in the German motorway from the roof window of the bus" is one of their crazier moments.

Insomnium have a long string of European dates at the moment, but keep an eye out for a U.S. visit ... as well as anything else that might fly out of their tour bus.