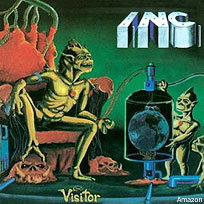 Outside of a few exceptions, Connecticut has never really pumped out that many higher profile metal bands. But its proximity to musical hotbeds New York City and New Jersey has meant that The Constitution State has always had a flurry of bands coming through on tour. In the late '80s, during the golden age of thrash, Connecticut looked like it might have had a group that would put the state on the metal community's radar.

Indestructible Noise Command had a lot going for them. The first album from the band, 1987's 'Razorback,' found them mining from the same new wave of British heavy metal influences that acts like Metallica and Overkill had explored. In the process, I.N.C. won the attention of the critics and fans in the New York tri-state area

With momentum in their favor, the stage seemed set for I.N.C.'s next album to take their local success national. Released in 1988, 'The Visitor' took the group's already potent blend of thrash and left-of-center vocal melodies and shot it through with a heighted sense of songwriting smarts.

Songs like 'Dry Heave' and 'What Are You Looking At?' had all of the bite and brawn that was expected on an album from that era, but it's the quirkier moments found throughout the record that make it so special. Dennis Gergely's peculiar vocal style lends the material a refreshing originality one hundred time signature shifts could never have done. Erik Barath and Tony Fabrizi's guitar work is no less adventurous. The duo's work on 'The Visitor' oozes with character, and like Gergely's singing, sounds as maverick today, as it did when the album was originally released.

Despite its inspired performances and infectious songwriting, 'The Visitor' didn't end up being the commercial breakthrough many people had predicted for I.N.C. The band soldiered on, writing and demoing for another album, but they ultimately threw the towel in during the early '90s. In the years since their initial breakup, I.N.C.'s eccentric brand of metal has been embraced by a new breed of record collectors, proving that their style was definitely ahead of its time.

It was recently announced that I.N.C. would be reforming and recording a new album, but Noisecreep thinks before you start following these skilled veterans, you should go back and listen to their earlier releases, especially 'The Visitor.' In this exclusive interview, we spoke with founding guitarist and songwriter, Erik Barath, about the aforementioned album and the time surrounding its release.

The band hails from Connecticut, but that has never really been a hotbed for heavy metal. Did it help or hurt, being a big fish in a small pond?

Well as far as being from Connecticut, it was a huge boost for us. We were one of the first metal bands of our kind there, and that helped a great deal. We formed just a few years after Metallica's 'Kill 'Em All' album, so we had a good following in a small market.

What other tri-state area bands were you playing with in the late '80s? I remember seeing you at Sundance on Long Island.

We played with so many bands is hard to remember [laughter]. Let's see, we played with Nuclear Assault, Overkill and the Crumbsuckers. We also did gigs with a ton of bands from outside the tri-state area like Testament, Megadeth and King Diamond, too.

Your 1987 album, 'Razorback,' got people in the metal community talking about the band. When you think about that time in the band, what do you remember the most?

The biggest highlight for me was when Pantera opened up for as at the Cat Club in N.Y.C. That is the night they got signed to Atco Records, and history was made for them. We were sitting around with Dimebag and Phil, and they told us how much we influenced them to go heavier. Looking back now, that's a real trip.

There seemed to be some buzz, especially in the New York area, about the band. Did you get any offers to sign with one of the bigger indie labels of that time?

We were in heavy negotiations with Elektra Records for a long time after 'The Visitor' came out. We were literally in the final stages with the contracts, and the A&R guy we were working with at the label got fired, and all of his projects got cancelled, too. It was really hard on us, because we were without a label and once that deal fell through, we were kind of just floating around. That event took a huge toll on us.

Let's talk about 'The Visitor.' How long did you work on the material before you headed into the recording studio?

We wrote for about nine months and then recorded it the entire thing in about 10 days.

There's something truly unique about the way the album sounds. In particular, the guitars really stand out. How much of this was already locked in by the time you recorded the record?

What you hear on all our albums is what we sound like live -- exactly. We like to keep the sound as raw as possible and not bury it with a ton of studio effects.

There's something about Dennis' vocal style, and some of the riffing, that gave you a quirky feel. How much of that was a conscious decision to be a bit different from what else was going on in the thrash scene?

We were really quirky back in the day, it came from being teenagers, I guess. We didn't deal with a lot of the harsh realities of life yet, as we do today.

The lyrics to 'Scammed Again' always struck a nerve with me. In the liner notes, you harshly call out someone named Don. Was the song directed at someone the band had dealt with?

That song is about two people, the first is a guy named Don who owned a rehearsal studio. He kicked us out after he had asked the band to play at a party he was throwing there. Anyway, a huge fight broke out, people ended up in the hospital, and he blamed us and not all the booze he was serving illegally to 18-year-olds. Mr. Cox was an a--hole who was setting up a tour for us. He took a lot of money from club promoters to reserve the dates, and then he just disappeared on us.

On 'The Visitor' you do a two-in-one cover of 'Just What I Needed' and 'Candy-O.' The Cars aren't exactly associated with heavy metal, so who had the idea to include the songs on the album?

The Cars was probably our favorite non-metal band, we all grew up with them and loved their songwriting style. I can actually hear a lot of their material being converted into a heavy metal style.

Do you remember what the public reaction to the album was when it finally hit stores?

The album did amazing considering we were on a tiny label with a lack of promotional support. We reached #1 on the national college metal radio charts, which was big for a band playing our style of metal. We also hit #2 in the U.K. for import albums, beating Aerosmith [laughing].

What songs from 'The Visitor' resonated best in the live setting?

'Bedtime Stories' had a huge impact. Everyone in the room would do the pogo, and nothing looks cooler than a couple of thousand people jumping up and down at once [laughter].

How much touring did you do for the album?

This was our biggest issue, because our record company, Giant Records, had little money and resources. We never really went on tour. The band just played up and down the northeast, which killed any prospects of real growth. It's probably our biggest disappointment. I hope we can make up for that this time around.

It seemed like I.N.C. just disappeared one day. What are the facts about your break up?

Well as I said before, once that record deal fell through, we started falling apart. When progress stops for a long period of time, and a band doesn't release anything new, the buzz starts to fade and we started seeing that, we started fighting more and eventually it got to a point where it wasn't fun anymore. So it ended ... until now.

When you go back and listen to your two albums today, how do they sound to you? Do you think they hold up?

Well obviously knowing what we do today, we wish we could do some things differently. I guess that is normal in life. But we are really proud that we were at the forefront of thrash in Connecticut.

You are working on a new album. Who is playing in the band these days, and will you be playing out this summer?

Yes, we are extremely stoked about the new material! It's beyond what we've ever imagined. It's the same band except for the drummer. We now have Dennis Leeflang from N.Y.C. Dennis is the drummer for Lita Ford and Bumblefoot (featuring Guns N' Roses guitarist Ron Thal). The new material is very heavy in both sound and style. This isn't your daddy's I.N.C. It's 2010, and the new stuff sounds like it. The final product will be out late summer, with a video soon after. The new record will be called 'Bleed the Line,' and is based on the German cannibal Armin Meiwes.

What was the feeling like within the band? Did you think that the songs could take I.N.C. to the next level in terms of the commercial reach of the band?

Well, we are working on brand new material. We have reached a whole new level of aggression after so many years of the band being dormant. There is a lot riding on this new material, but [there is a lot of] torque is in this old engine.