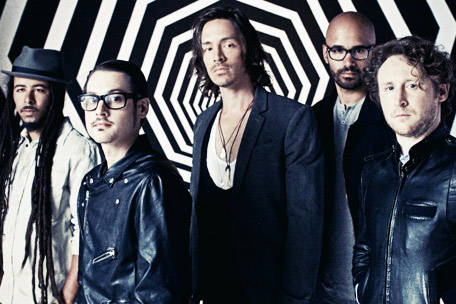 Modern rock giants Incubus are gearing up to release their sixth studio album 'If Not Now, When?' on July 12th. The Southern California band once again worked with producer Brendan O'Brien [Bruce Springsteen, Stone Temple Pilots] who was also onboard for their previous two records, 2004's 'A Crow Left of the Murder...' and 2006's 'Light Grenades.'

While 'If Not Now, When?' features slinky-grooved rockers like leadoff single 'Adolescents,' the collection digs deeper into the textural side of Incubus' sound, resulting in the most rewarding album in the group's career. "I just think as we get older and experience all the things life brings us, it opens up our sound more," says Incubus guitarist Mike Einziger during a chat with Noisecreep.

"Some of our fans get a little thrown off from record to record since we always change up a bit, but that's been happening all the way back to our 'S.C.I.E.N.C.E' [1997] album. From that record to 'Make Yourself' [1999], we got less heavier and more focused on the textures and melodies in the songs. A lot of people were surprised by that at first. In the end we always write what comes naturally and I can't wait for everyone to hear this album," says an excited Einziger. Noisecreep is also excited about the new album, so without further ado, we bring you the video premiere of its fantastic title track.

Watch the video for 'If Not Now, When?'


The footage for 'If Not Now, When?" clip was recorded at Henson Recording Studios, which Charlie Chaplin founded in 1917. Since then the location has had a rich history as home to some the world's most celebrated talents, among them Herb Alpert and Jerry Moss and their record company A&M Records.

"There's so much history there. It's a huge room and they do a lot of orchestral recordings in there since it can handle all of the sounds," says Einziger. If you look closely, the studio might look a bit familiar to some of you. "Yes, it's the same room where they filmed the 'We Are the World' video back in the '80s [laughs].' 'If Not Now, When?' will be in stores on July 12th via Epic Records.