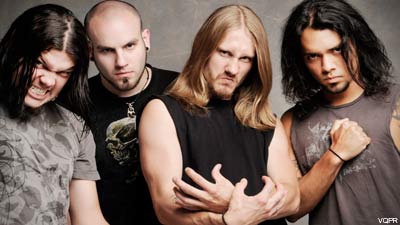 For Arizona thrash rockers Incite, it's been a long road leading up to their debut album 'The Slaughter,' which hit stores Oct. 20 in the United States and Nov. 3 worldwide. Singer Richie Cavalera, son of Max Cavalera, formed the band in late 2004, but he needed time to let the songs grow and mature before slapping them on a release.

"It's not an easy thing, you know," Cavalera told Noisecreep. "It could have been scrapped together and done quicker, but there was a lot of growth for me over the last five years with the band. I think it just took band some time to find our sound and promote it by touring. We've toured nonstop since becoming a band and really learned how to play live shows and everything like that. I think the time was well deserved for us."

He also needed to find the right guys for the project. "2004 -- that was really early in my musical age, so it took time finding the right people," Cavalera said. "Those kids that were in the beginning of Incite -- none of which are in the band now -- didn't fit the criteria I was looking for. It's tough to find the right people. There's a lot that goes into it: traveling with someone, living with someone, collaborating with someone musically, families connected. Now I feel it's come to a point where it's got its members and structure and it will be there for a long time."

With the lineup that also includes drummer Zak Sofaly, guitarist Dis and bassist Luis Marrufo, Incite now have an extensive list of shows under their belt, having toured Europe and the United States in 2008 with Cavalera Conspiracy, Throwdown and Dillinger Escape Plan. They just returned from a 57-date European jaunt as the main support to Soulfly. Overseas shows and gigs outside of Arizona have been most beneficial to the band.

"You can play local shows at home with friends and people that you know are going to be excited and enjoy your show," Cavalera said. "To reach people in Europe and America and see them respond in a good way, those things can't be measured in how much it helps you as an artist, your stage presence and not being scared in front of a crowd. That was something that we definitely learned on tour."

Those shows also allowed Incite to road test the material on 'The Slaughter,' which was released on I Scream Records and produced by Logan Mader (DevilDriver, Cavalera Conspiracy and Divine Heresy).

"That's another plus, for sure," Cavalera said. "We definitely did a little tweaking when we came home. We also were able to write three new songs when we came off of tour. We had a good idea of our style and we learned what people were connecting with more."