May 14 will see the release of 'Kingdom of Conspiracy,' Immolation's ninth studio album. For the album sessions, the influential New York death metallers collaborated once again with producer Paul Orofino and handed the mix and master job to Zack Ohren (Suffocation, All Shall Perish).

Immolation will be part of the Decibel Magazine Tour 2013 along with Cannibal Corpse, Napalm Death and rotating openers Beyond Creation, Cretin and Magrudergrind. Check out all of the dates below.

Today, Noisecreep is offering an exclusive look behind the making of the striking cover art for 'Kingdom of Conspiracy.' Click below and read Immolation guitarist Bob Vigna and artist Pär Olofsson (Abysmal Dawn, Job for a Cowboy) recall how the project came together, sketch by sketch. 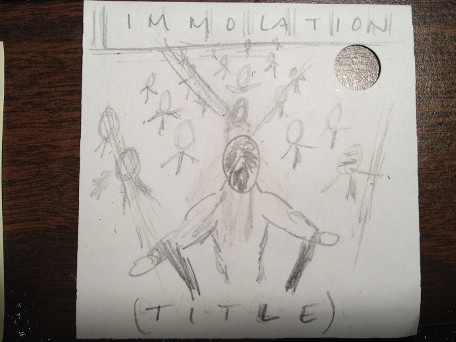 Pic 1 – Bob Vigna: Our concept was a hard one to get off the ground as it was a very different type of piece for us. Trying to portray these ideas without the cover looking too political or too futuristic was a challenge for us personally. We really wanted to focus in on the people that were the victims, so we had the idea of having a mass of people shackled down and restrained, symbolizing this oppression. We had the utmost confidence that Par would nail it...it was just a matter of getting the main idea solidified.

Pär Oloffson: Bob and Ross [Dolan, bassist/vocalist] had a concept ready for the cover and it was to portray the end result of an overly oppressive totalitarian state, and its effects on the people of that society and how it takes the humanity out of people. They provided me with a sketch, but were very open for ideas. 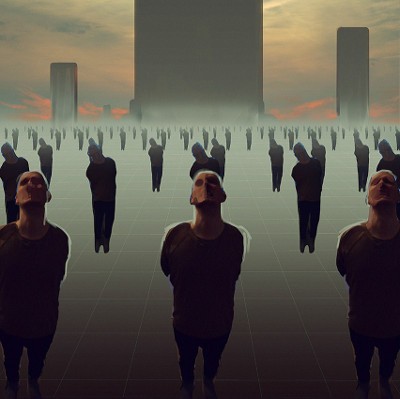 Pic 2- Bob: Yes, although the mass of people was represented well here, the oppressive element was not coming across strong enough with this perspective. We definitely felt that the "authority" that was putting the masses under control needed to have a much more ominous feel and look.

Pär: At this point, nothing is written in stone so I made some very simple sketches just to see if we could get a nice composition. The monolith in the background is an important element since it would represent the oppression, however the size of the thing is somehow lost using this perspective. 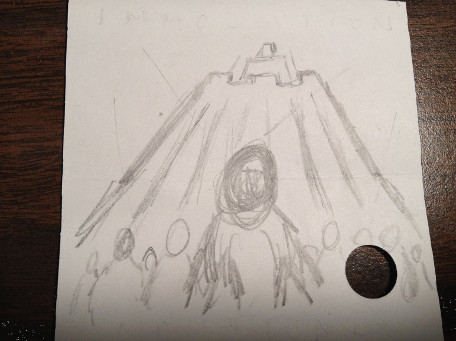 Pic 3 – Bob: I sketched something else up that I thought would give the authoritative/oppressive structure a much more ominous feel, but at the same time hinting at the fact that there were masses of people, without having to show them all. We really wanted the back structure to be something that was literally looming over the masses, watching them, monitoring them, controlling them.

Pär: Got a new sketch from Bob and Ross that gives the monolith a more central role. 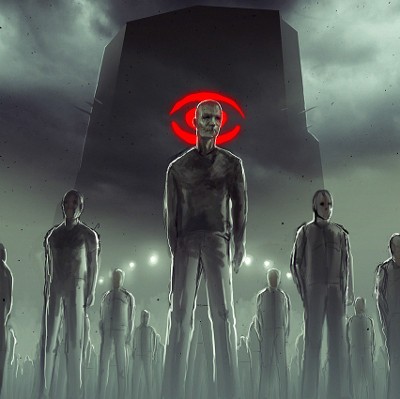 Pic 4 – Bob: Yes, this one seemed a bit too futuristic looking to us and as Par mentioned was still not at the needed perspective yet.

Pär: Made another quick sketch. The eye on the monolith would be some sort of big brother type of thing and also work as an eye catcher. The eye did not get received well and the perspective still had to be more of a frog's perspective. 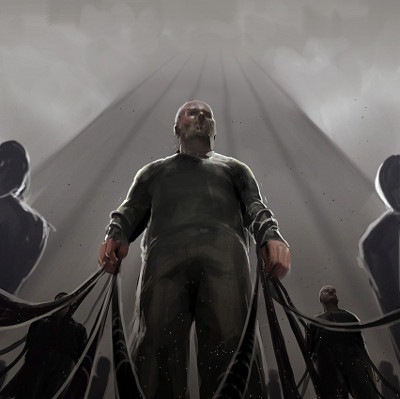 Pic 5 – Bob: At this point Par hit the nail on the head and we were on our way!! We knew once Par got the right angle and feel it would all come together in no time. It's like when we got the first sketch of the figure for our 'Majesty & Decay' album right away we knew that was it!

Pär: This sketch hit the spot and it finally felt like we were on the right track. From this point, when you don't have to worry much about composition and such, the process moves along pretty smooth. 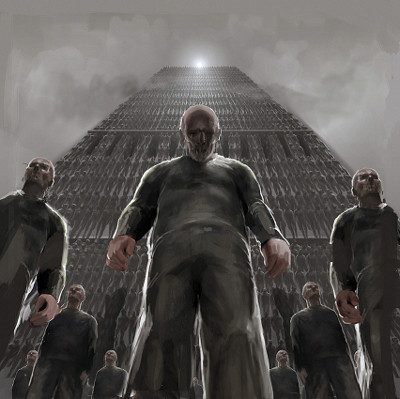 Pic 6 – Bob: Once we agreed on having that oppressive element in the background, we really wanted to drive home the fact that it was the people themselves that were not only the victims, but who were also part of the problem. In order to capture this we thought it would be interesting to have the structure made up of the actual people. So when you first look at it , it appears to be an ominous structure, the "authority" so to speak,...but then at a closer glance you see it is made up of all the people who feed themselves into it. It really brought the point across and made the structure a living, breathing object.

Pär: The monolith is now taking shape. It's made of people! 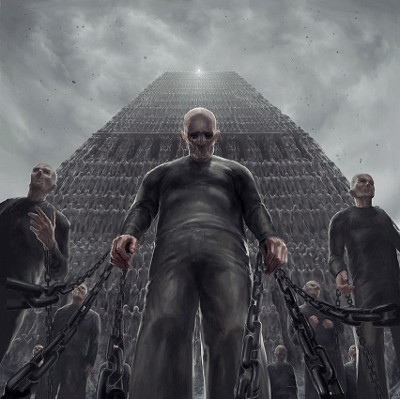 Pic 7 – Bob: Watching Par adding the details in is always the greatest thing. With each update we got from him, the piece would slowly transform and come to life. (Or quickly I should say!)

Pär: Chains in perspective is always a challenge. I drew these on paper with pencil and scanned them. 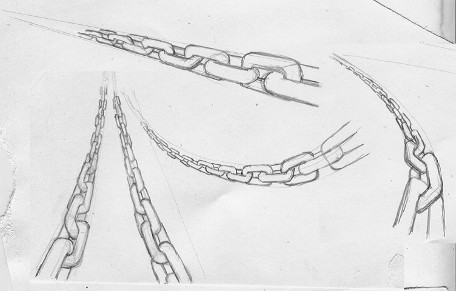 Pic 8 (chain sketch) - Bob: This is cool to see. It's fascinating to see a glimpse of how Par works. He definitely made it clear that these chains were not an easy task, and it's very understandable why. To see those pencil sketches and then see how they turned out on the finished piece is amazing. 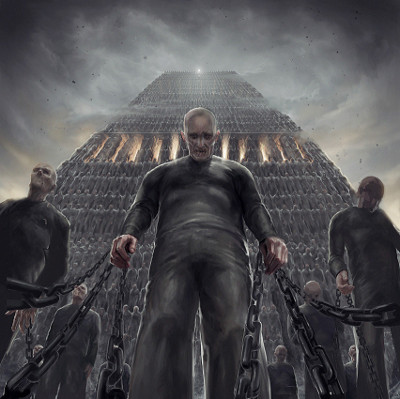 Pär: The structure felt a little flat and boring so made some light coming from within. The warm tone of the light was however a bit too comforting and in later version toned down in intensity and hue. 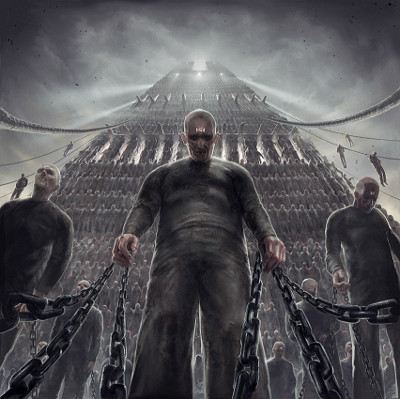 Pic 10 – Bob: We thought we could make the structure a bit higher and wanted to have it a bit less box-like,...so Par worked his magic and really came up with some more cool details. The sharp edging sticking out and second tier of openings really gave it a much more menacing look. We thought it would also be good to have the figures being pulled into the structure too, almost as if was sucking them in. So the cables and more bodies were added. The spot lights were added to represent all the monitoring, the watchful eye on every move of the people. Par added a few extra ones in there making it really work.

Pär: More stuff added to the structure. A system of wires so people can be winched up and fitted into the building. The guys in the front now have glowing bar codes, a request Bob and Ross made at an very early stage. 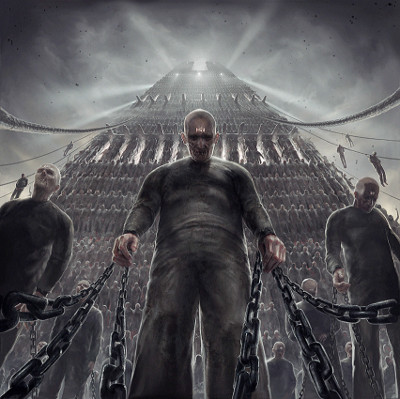 Pic 11 (Finished Piece)- Bob: It always amazes us to see Par take a 3"x3" post note sketch and turn it into a true work of art. The detail he puts into his work is nothing short of incredible. From the dirt and filth on the figure's clothing, to the rust on the chains, to the main figure's expressions, and a structure of thousands of people on top of all that. Par never ceases to amaze.

We want to thank Par for all his patience with us on this project. It personally took us a while to get our concept ideas together , and we went back and forth, changing a few thing on Par at times, as you can see by the progression. But Par came through for us once again and truly gave us our 'Kingdom of Conspiracy.' 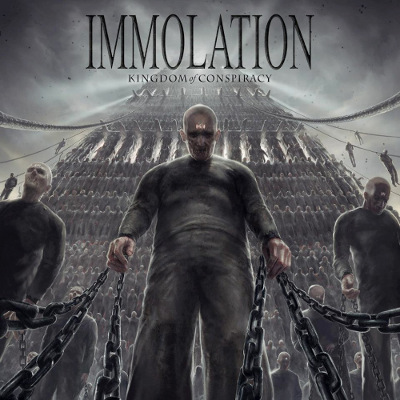 'Kingdom of Conspiracy' will hit stores on May 14 via Nuclear Blast. Listen to the title track at Decibel's online home.