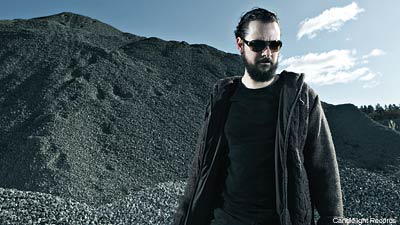 If the first two adventurous solo albums by ex-Emperor frontman Ihsahn's -- 2006's 'The Adversary' and 2008's 'angL' -- were the sounds of endless turmoil, shattering conflict and interminable aggression, the final part of his 'A' trilogy, 'After,' is a desolate portrait of the end of ... everything.

"The lyrics are not very confrontational at all," Ihsahn tells Noisecreep. "It's more of a return to this very post-apocalyptic landscape. There are no signs of life in any of the lyrics. It's more about contemplation than conflict. It's about watching and observing, and most of the music also portrays that."

Indeed, 'After' features clean vocals, pensive acoustic guitar interludes and near-psychedelic atmospheres that waft like windblown smoke from a raging inferno through a framework of brutal blastbeats, punishing thrash riffs and black metal vocals. While Ihsahn's first two solo albums were definitely experimental, here he abandons all the rules, delving waist-deep into a cesspool of prog-rock, psychedelia, jazz and doom.

"I feel like I've really progressed musically throughout all three parts of this trilogy," Ihsahn said. "'The Adversary' was an experiment for me, trying out all the subgenres of metal I always wanted to explore but wasn't able to within the limitations of Emperor. It was all over the place. I think 'angL' was more focused and cohesive. And 'After' is the result of me being more comfortable with my musical platform, and deviating even further from where I went with the two previous albums. It's built on the previous two, but it kind of opens up new avenues for me so I have more places to go musically next time."

Ihsahn started writing 'After' in mid-2008 when he finished 'angL,' but the bulk of the songwriting began in January 2009. He wrote and tracked his parts at his home studio Symphonique, with the help of co-engineer Borge Finstad. Drummer Asgeir Mickelson (Spiral Architect) recorded at Top Room Studios and edited his work at his home studio. And bassist Lars K. Norberg (Spiral Architiect) recorded at his own house and sent MP3s to Ihsahn for approval. Then, even though Ihsahn mixed his previous two albums, he decided to hire Jens Bogren to put the finishing touches on 'After' at Fascination Street Studio.

"I decided early on that, having done a couple albums myself, it would be nice to have a second pair of ears," Ihsahn said. "Jens was at the top of my list. I love the work he did with Opeth and Katatonia and other bands. He makes everything sound fantastic."

Having completed his 'A' trilogy, Ihsahn feels he's free to venture even further into uncharted territory for whatever he decides to tackle next, be it a 'B' trilogy or a freeform avant-garde album of instrumentals.

"People ask me if I'm done now and will this be my last album," he said. "I think of it more like I've come to an end of this part of my career, and now I have some play room for what I do next. I don't ever want to get stuck in my own conventions."

Lest anyone interpret the black metal pioneer's comment as an abandonment of his trade, rest assured. Ihsahn has no intention of completely vacating the genre he's worked in for 14 years.

"I think that metal is second nature for me, and it's quite natural to keep my music with that form, but that's the challenge," he explained. "It's not just about having a free forum where you can do anything, but more finding new things to explore musically within the parameters of distorted guitar and hard-hitting drums. So, I can't say I'm going to go all progressive with strange noises and everything. I just want to keep my options open."