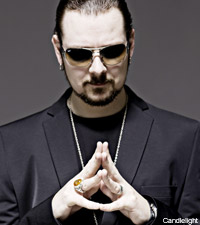 Former Emperor frontman Ihsahn has announced the U.S. release date for the third installment in his solo trilogy, 'After.' Set to drop on Jan. 26, the upcoming Candlelight Records release was recorded earlier this year and features the Norwegian icon alongside drummer Asgeir Mickelson and bassist Lars K. Norberg of Spiral Architect, and saxophonist Jorgen Munkeby of Shining.

Commenting on the creative process this time around, vocalist/guitarist Ihsahn explains, "This is my first album written with eight-string guitars as basis which has been both challenging and inspiring." As for his collaborators, Ihsahn adds, "Asgeir and Lars have again delivered superb performances. I've always wanted to implement the saxophone in my music; Jorgen's contributions truly added a silver lining to the album."

Primarily working at his own Symphonique Studio, Ihsahn goes on to explain his comfort level in writing songs for 'After,' saying, "I have felt more confident and more at ease with the material. In letting the songs themselves lead the way I just followed the natural impulses."

Following the 2001 demise of Emperor, Ihsahn made Peccatum -- the side-project he formed with life partner Ihriel in 1998 -- his main focus. Soon after releasing 'The Moribund People' in 2005, he began writing solo material and released his first namesake album, 'The Adversary' to worldwide acclaim.

Experimenting with textures and sounds foreign to Emperor, the second part of this three-part series, 'AngL,' followed in 2008 and received positive reviews from various publications, including Decibel magazine, which called the album "as compelling as Emperor's best; Ihsahn sounds as fresh as he did fifteen years ago, but with the hindsight of a grown man."

Just months ago, Ihsahn gave his first live performance as a solo artist, opening for Opeth in Oslo. Following the release of 'After' early next year, more live performances may be in the works, but there is no official word just yet.