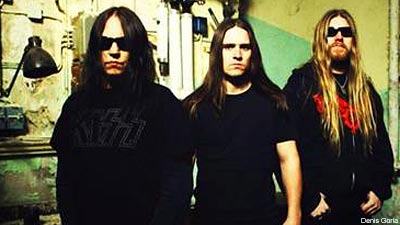 On Nov. 6 in Springfield, Va., Hypocrisy and Ex Deo are scheduled to hit the road with Ensiferum for a brief U.S. tour. Only Ex Deo and Hypocrisy can't get into the country because immigration won't grant them visas.

First, Ex Deo revealed on Monday that they'd be forced to drop off the tour, which also features Blackguard and Swashbuckle. Maurizio Iacono, who fronts the Canadian-based, Ancient Roman-themed metallers, said in a statement that "some confusion happened in the visa department for a couple [of the] guys in our camp and by the time it will be solved, the tour will be too far in for us to join it and financially, it would be a disaster."

He says the band plans to return to the states in 2010 to do some touring, but has nothing concrete to announce yet. Meanwhile, Hypocrisy are also dealing with visa issues. And now their participation on the tour is in question. Dates are booked through Dec. 5 in New York City.

"Due to circumstances beyond our control, we are forced to stay home until U.S. Citizenship and Immigration Services process and authorize our working visas," reads a statement from the band. "This is the first time the band has faced a situation like this and it's extremely frustrating, as well as depressing, since the last thing we want to do is disappoint our loyal fans who have waited years to see us live in the U.S. We filed for our visas with plenty of time, but as some probably don't know, the U.S. government has changed its rules when it comes to visas issued to artists so it's become tougher. Even if we have already toured the U.S. numerous times.

"As it stands now, we are on stand-by mode and waiting to receive the green light," the statement continues. "We hope it's just a few days before that happens, in the meantime we want to apologize to all the fans that planned on going to see us tear s--t up live. We will do our best to re-join the tour as soon as possible."

Ex Deo's debut album, 'Romulus,' was released back in June, and Hypocrisy's eleventh LP, 'A Taste of Extreme Divinity,' hit stores on Nov. 3.