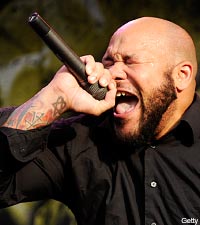 They've been getting by with a little help from their friends Phil Labonte and Jesse Leach, but now Killswitch Engage have announced a handful of spring shows that'll once again feature frontman Howard Jones behind the microphone.

Jones sat out for Killswitch Engage's most recent trek with the Devil Wears Prada and Dark Tranquility, leaving the band no choice but to call on All That Remains' Labonte and their original singer, Leach, to fill in for him. Killswitch remains silent on why Jones had to skip on the trek, and the band has yet to respond to a flurry of rumors regarding his absence, including whispers that he might have been bounced from the group.

Jones announced last February that he had to unexpectedly leave the tour. Killswitch subsequently released a statement addressing the matter, saying, "It became overwhelmingly obvious to all of us around Howard that he is in no condition to be on tour right now and that he needed to get off the road and get himself better. It's a personal matter and while we understand everyone's curiosity and concern for Howard and the band, we appreciate everyone respecting Howard's privacy at this time."