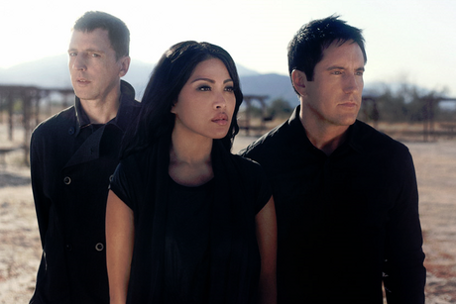 Trent Reznor's How to Destroy Angels project, which features his wife Mariqueen Maandig, has signed to Columbia. So Reznor is back with major? Before you scoff, he did post an update on Facebook about the decision to return to a label at this point in his career.

The band will release its debut EP, An Omen, on Nov. 13. Below is the entire unedited text of Reznor's Facebook post on the band's signing:

Sorry for the radio silence lately... I've been busy! There's a number of things to be revealed over the coming months. Some you may expect, others you may not. Patience, my friends.

Today's news is about my band How To Destroy Angels. I'm happy to announce we've formally partnered with Columbia Records for our next series of releases. The first of these will be available in November and it's called An Omen EP. As you may have guessed, it's an EP. It contains six songs, some of which are from our full-length LP which is coming early next year.

We are making some videos, we are going to be performing live, and that's all the details I have for now on those matters.

Regarding our decision to sign with Columbia, we've really spent a long time thinking about things and it makes sense for a lot of reasons, including a chance to work with our old friend Mark Williams. There's a much more granular and rambling answer I could give (and likely will in an interview someplace) but it really comes down to us experimenting and trying new things to see what best serves our needs. Complete independent releasing has its great points but also comes with shortcomings.

We are all very excited about you checking out the new stuff. Wish I could tell you more, but you know how this works...it would take all the fun out of it! [Facebook]

Watch How to Destroy Angels' 'The Space in Between' Video

Slipknot/Stone Sour frontman Corey Taylor, who is also an avowed comic book fan, will attend New York Comic Con on Oct. 13. He will appear at the Dark Horse Comics booth to announced a new project. Perhaps his own graphic novel? [ThePRP]

Summer 2012 just ended but the organizers of Download in the U.K. are already thinking ahead and planning for Summer 2013. They've recruited Iron Maiden and Rammstein as headliners. That's reason enough to confirm your trek to Donington Park on June 14 through June 16. [Metal Insider]

Getting ejected from a concert is embarrassing. But getting tossed from a venue by onetime Skid Row singer Sebastian Bach or being called out as the fat guy by Bring Me the Horizon is even more humiliating. You have to check out these 10 best concert ejections and laugh your ass off. [Loudwire]

The Barge to Hell will set sail without black metallers Belphegor. The extreme metal cruise is due to leave port on Monday, Dec. 3, 2012 from Miami, Florida to Nassau, Bahamas, through Friday, Dec. 7 and it'll be without Belphegor when it does.

I wanna hold to the March 2013 album release date and unfortunately studio terms collide with the cruise. Because of my health issues, we had to delay a lot of things during the last 12 months: tours, studio sessions, recording and so forth. We put extra creativity, extra magick - full concentration and energy into the new album to get the best result possible of our art. I hope you all understand this difficult decision for the band, to cancel and pass on this great experience. We really wish and hope that we can be a part of it in one of the next year's editions. In hell we burn!!! [Blabbermouth]