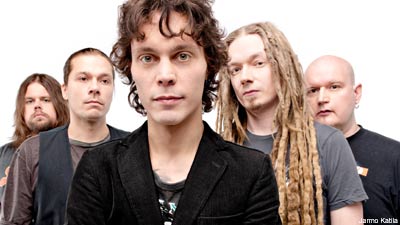 "We've always been playing with contradictions and the yin yang of pop and rock 'n roll," HIM frontman Ville Valo told Noisecreep. With the new album, 'Screamworks: Love in Theory and Practice,' Valo says the combo is delightfully peculiar and beguiling. "I find the combination peculiarly satisfying, direct and in-your-face. It's like the sonic equivalent of 'Blue Velvet,' the film by David Lynch. I went to cinema to see that movie and I sat down, watched it and it was full of surprises yet filmed in a traditional way. You lose the balance, as a viewer. This album does the same for the listener. It gives something unique and easy to absorb."

That's a deep and complex way to describe the record, but after a few listens to 'Screamworks,' it'll all make sense. The message is encased in a gorgeous, melancholic, goth 'n' pop package! Of making the album, Valo said, "It was a blast, but the amount of detail we put into it was incredible, given that it's three-and-a-half minute pop songs at the end of the day. I am excited about it sounding a bit new. What I was struggling for was a singular vibe in the rock 'n' roll world that Depeche Mode have in the electronic world. They play sad, tragic songs that are performed in a way that makes you want to dance. It's that celebratory pain that was the code for me. It's the synths and the tragic melancholy elements of Depeche Mode with the rock 'n' roll elements of rock bands."

As for HIM's consistent categorization as a gothic band, given their dark imagery and lyrical concentration on love lost, Valo said, "In California, gothic rock is different than what it is in Leeds, England or in Berlin, Germany. It's different from country to country. In California, it's more about what you wear, and not the music. Industrial and gothic are very linked. In London, the darker, electronic goth stuff is close to tech metal.

"If you close your eyes, you wouldn't know if you are at a trance gig. In Germany, it's still just as hard hitting, super dark stuff and people are dressed up as proper vampires. I just care if people are interested in us. I was always listening to Sisters of Mercy, A-Ha, Duran Duran and Madonna. I think all of those artists are important. I love Madonna's 'Live to Tell,' but it doesn't make a lesser goth. 'American Recordings' by Johnny Cash is way more goth than any gothic rock that exists. It's interpretation, and I don't mind what people say as long as people have the energy to take a listen to what the music is all about."