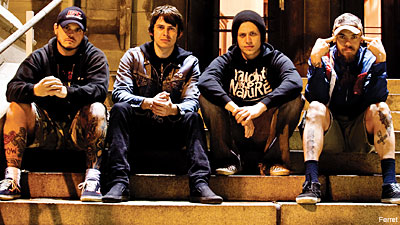 "Ultimately, the church's plan to protest Hellmouth was a total cock-up," Hellmouth's Alex Awn told Noisecreep, offering the coda to a priest's much-publicized attempt to ankle the band's participation at Failure Fest in Logansport, Indiana in early May. The fest, an annual canned food drive, is sponsored by local punk rockers and when a student brought home a flyer with Hellmouth's name festooned on it, his parents took it to the local priest for some inexplicable reason. The priest did his Google homework and saw the band's album cover for 'Destroy Everything, Worship Nothing,' which features imagery, such as inverted crosses and pentagrams, that could be construed as blasphemous The artwork inspired the priest to pressure the promoter to remove the band from the bill and to attempt to organize a protest if the band played on. Turns out, it was all idle threats because the protest never happened!

Hellmouth are thrilled that the good Father made such a fuss, as it thrust them in the media spotlight "and showcased the Church for being the fear-mongering, brain-washing, hypocrites they are. From what we gather, one member of the Knights of Columbus hall lost his job over the whole debacle and the mayor's office was literally calling households in the small town in order to stop parents from letting kids attend the show," Awn said.

Despite the hoopla, Hellmouth's ire at the situation blazed at fevered levels. "The church had no business censoring independent artists on any level," Awn claimed. "They have a sordid history of doing so, so it's hardly surprising. They've been burning heretics at the stake for hundreds of years for simply disagreeing with their narrow-minded mores. I'm sure if they could get away with it, Hellmouth would be next in line to burn behind the homosexuals, Muslims and blasphemers already in their sights. Hellmouth doesn't give a f-ck who attends our shows. We'll annihilate night after night regardless of sex, color or religion. Hellmouth shows have ended in riots before and will no doubt end in riots or protests in the future. A dude [even] lost his eye at a show! How punk is that?"

Lost an eye? Ok, it turns out it was a prosthetic eye, but still! "It popped out during the first song," Awn said. "We had to stop the show while everyone looked for it. Someone found it and people shouted, 'Don't wash it!' The guy picked it up, raised it in the air like a trophy, then proceeded to the bathroom where I assume he washed it and popped it back in his head. It's small town, so I guess these things happen." That's fair warning to proceed with caution at Hellmouth shows!