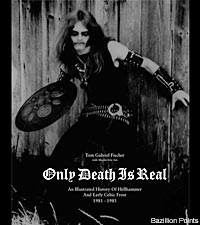 Tom Gabriel Fischer -- also known in the metal scene as Tom G. Warrior, frontman for Celtic Frost -- put together a book of photos documenting his pre-Frost band, Hellhammer, called 'Only Death is Real: An Illustrated History of Hellhammer and Early Celtic Frost: 1981-1985.'

"The impetus [for the book] is my life, and the events that took place during the past few, very intense years," Fischer revealed to Noisecreep. "I have always remained very closely connected, emotionally, to the early days of my career and the very drastic and unique circumstances of my existence at the time.

"Reforming Celtic Frost, the group I originally founded all those years ago, provoked an even closer review of this intimate background of mine. Eventually, I had researched and collected so much material that the idea of a book began to materialize."

The book, which Fischer began manuscripting and compiling in 2005, is more than a coffee table decoration for metalheads and headbangers. "It is a book for anyone who has dedicated his or her life to metal and who still perceives the element of rebellion in this form of music," Fischer said. "It is a book that provides a rare, lavish and very candid glimpse at part of the birth of modern extreme metal.

"It's a book for anyone who can relate to being a true outcast and finding his or her path through the friendship and intensity that metal has always been able to provide." Ironically, Hellhammer bassist Martin Eric Ain, who put the book together along with Fischer, has been vocal about the fact that he isn't even able to relate to his time in Hellhammer, now and then.

Did we mention the photos are like historical documents, so to speak? "All of the photos published in the book represent deeply personal and important moments in my life," he also said. "Many of the photos capture the unique energy that characterized our group of friends and musicians at a time when metal was experiencing a major rebirth and an infusion with previously unknown power and heaviness. It is thus utterly impossible for me to single out individual photos as favorites. I sometimes wish we would have had room for the other hundreds of unpublished photos still in my archive, but I am confident we selected the very best and most significant ones for the book."

"Only Death is Real" is due out in November.