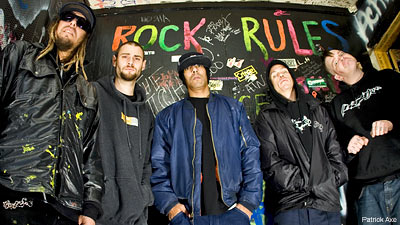 While on tour in support of their seventh album "New World Orphans," (Hed) pe plans to engage in direct communication with fans about political and global issues. "(Hed) pe has become much more than music," vocalist Jared Gomes told Noisecreep. "We are honored and blessed to be a part of something much bigger than we are, something known as 'The Truth Movement.' We are using our music as a vehicle to deliver esoteric wisdom. That means looking beyond the surface of mass media foolishness, ignoring the talking heads of cable television and looking to alternate sources for information, such as books and the Internet."

After every show, the singer is taking time to interact with every single fan that wants to meet him. "Although we don't have the time to get into long conversations, the personal connection is beautiful," Gomes said. "I know we are all on the right path. These kids are incredible. The other night, we were in Denver, Colorado, and I had no idea that there were so many homeless children there and yet all of them had smiles on their faces. There was a homeless shelter right next to the club and these youth are hopeful in the face of much tragedy. As Americans and human beings, we should be taking better care of our children. It's a shame and I hope to start some sort of charity foundation to help these disenfranchised kids. They deserve better. These rock stars with their mansions and big cars should think about who actually pays for that s---. Makes me want to puke."

Fans who can't attend shows on the current tour can still communicate with the band via hidden messages in the "New World Orphans" artwork, which was released with three different covers containing part of message that when pieced together enables fans to interact directly with the band. Leave it to (Hed) pe to bring it to the people.