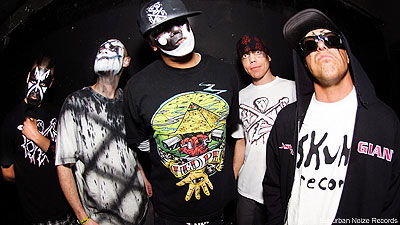 Noisecreep is happy to premiere the new song 'No Rest for the Wicked' by progressive thinking rap metallers (Hed) pe. It's anthemic and raw, shunning crisp, sterile digital production in favor of a real, dirty feel and a chorus of 'Eee oh' that is reminiscent of the Police.

"'No Rest 4 da Wicked' is a song about how we renegades, which is what we call (Hed) pe fans who are involved in the truth movement, will never let up. How we will never give up. How we will never stop fighting for truth, peace and love," vocalist Jahred told Noisecreep. "We recorded in a nice big studio. Ya know, with a nice big analog board, because we wanted to get that warm, old school sound, since everything today is digital. Then I take the track to my home studio, record the vocals, produce and mix the tracks."

Listen to 'No Rest 4 da Wicked'

Jahred also used some recently acquired new recording hardware for the song. He said, "Since our last album did so well, I was able to invest in some nicer stuff, and the audio quality is a lot better on this one. I was really stoked."

The song will appear on the band's upcoming greatest its compilation. While it might seem early or premature to some, the band is about to release its eighth platter. "We figured ... it was time to release a proper compilation album, one that covered all eight albums," Jahred said. "Eight is a powerful number, because it's like infinity. Which is where we're headed. We figured the fans needed one CD that covered our entire career. Starting from the 'Major Pain' and ending with the 'Indee Freedom.' Our first label put out a compilation record with zero input from the band, and we thought that sucked. So, this is our way to give back to the fans."

The band will play the song along their upcoming tour, along with songs from their forthcoming album, "to give the kids a taste for what's coming their way."

(Hed) pe will be appearing on the Strange Noize Tour shortly, alongside Kat Calhoun, Big B and Johnny Richter. Jahred said, "The lineup is absolutely stellar, and we are totally excited, considering we haven't toured in the States since 2009. We spent a lot of time in Europe, including Russia, and absolutely killed it overseas, but now it's time to do our thing in the good ole U.S. of A."

He continued, "Strange Noize is killer, because it takes different styles and brings them all to the youth, which is what most youth want anyway. They get tired of cookie cutter tours with all the same genres. This tour has punk. It has reggae. It has hip-hop. And it has hardcore heavy metal, so there is something for everyone. The vibe is more like a family reunion, so there is a positive thing going on."