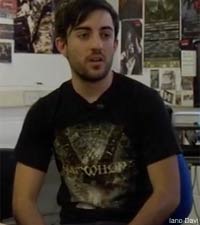 In 'Heavy Metal Roadshow,' Iano Dovi sets out on an international journey in honor of the 40th anniversary of metal. Dovi -- who works as a correspondent for VBS -- has become a metal aficionado over the years, playing in several bands and working as a tour manager for acts like Slayer and Every Time I Die. Dovi's global trek begins in London with one overall goal in mind -- to explore "where metal has been, where it is now and where it could be headed in the future."

Dovi begins his thorough examination of the metal subculture in London by interviewing heavy hitters within the metal industry, such as DJ Neal Kay and the editor of the acclaimed extreme music magazine, Terrorizer. Kay provides much insight into the way metal was in the past when it was first developing as a genre. He even boasts one of the only two surviving original Iron Maiden demo tapes from 1978.

Dovi then travels through the heavy metal time machine and warps back to the present by speaking with upcoming British metal bands like Trigger the Bloodshed. Dovi also interviews Steve 'Lips' Kudlow of Anvil, who probably has the best all-encompassing statement about the British underground metal scene.

"It's more of a lifestyle as opposed to a trend," says Kudlow. "It is a community within a community. It has die-hard followers and almost represents some sort of cult following."

Check out episode one of the four-part series, courtesy of our friends at SnagFilms.