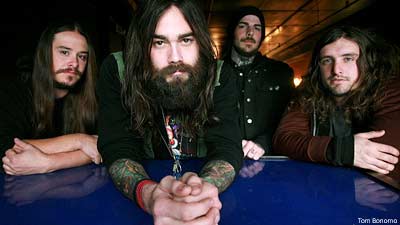 'It Hates You,' the new album from North Carolina rockers He is Legend, is an apropos name for the band's third record, according to lead singer Schuyler Croom.

"It pretty much sums up the last two years of our lives," said Croom during an interview with Noisecreep. "It's just a very angry, raw-sounding record. It's still real rock 'n' roll. It's just kind of that middle finger album. We all thought the name was very fitting. There was no ingenious moment where we were like, 'Yes!' Most of the things that we do spawn from jokes. We're a pretty whimsical silly band, as people. It's just like that's the name of the album."

He is Legend recorded the album, in stores today, with former band member and current Filter guitarist, Mitch Marlow, and Al Jacob from Warrior Sound recording studio. But more or less, it was He is Legend leading the way. 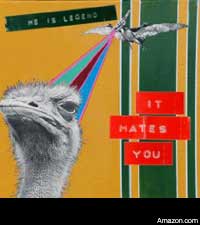 "We finally reached the point where we want to do what we want," Croom said. "That's the motto we've been living by for awhile. It just made sense to stay close to home. The records that Mitch and Al have done, they always sound so great. We just kind of knew ever since we ended up with going with (former producer) Steve Evetts that we were going to do our next album with Mitch Marlow. He played in the band for a minute. He toured with us. He went to Australia and Europe with us. He did the tour we did with Killswitch (Engage). He's doing producer stuff now. He plays guitar in Filter as well."

Another good friend, Tommy LaCombe, of its new label Tragic Hero Records, was there throughout the process.

"We just wanted to put it out with someone who we knew and Tommy's a great guy," Croom said. "It just made sense to stay close to home and work with friends. I don't really see the point in the huge record label situations anymore. It seems like that's the fairy tale, what you're supposed to do as a band. But really it just ends up taking money out of your pocket.

"If you've got a good product, people will like it no matter where it's coming from," Croom added. "We really like Tommy. He's a good Southern boy and knows what kind of music he likes. He's so genuine. We needed that at the moment. If it wasn't for him, we probably would have released it online, in the vein of Radiohead and Nine Inch Nails."

Left to its own devices after their departure from Solid State Records, the band took time and care in writing 'It Hates You.' He is Legend also includes guitarist Adam Tanbouz, bassist Matt Williams and drummer/percussionist Steven Bache.

"It's usually Steve and Adam hashing out the backing tracks," said Croom, who also goes by Schuyler Dane. "Then we do a really rough GarageBand demo out of the songs. Matt, Adam and Steve, once we have the whole thing written, it takes life in the studio and you kind of hear what everyone was sort of thinking it was going to sound like. It's the way we've always worked. It's not really much different than any other time we've written a record. It was a better experience for us. We were able to record in North Carolina with friends and take our time and do it in sessions, and not get burned out from being in a studio. That's ideal for us, especially being in the woods in North Carolina in Warrior Sound. It was a great process for us. Great fun."


Listen to 'It Hates You'

He is Legend Tour Dates
on TourTracker.com