Jamey Jasta of Hatebreed is always on the go, go, go.

He's juggled duties like running his Stillborn record label, being a father, guesting on other band's albums, being a member of side projects and hosting the exhumed 'Headbanger's Ball' on MTV a few years back, in addition to fronting the band. Jasta has been the hardest working man in hardcore for many years now, but he has toned it down a bit recently, narrowing his focus on Hatebreed in recent years out of necessity.

Today, Hatebreed unleashed its Razor & Tie debut, The Divinity of Purpose, and that's a good thing. The album is the band's best since 2006's Supremacy. Noisecreep caught up with Jasta to chat about the album, and how he's refocusing on certain aspects of his career.

Hatebreed are in a good place -- a new label, stable lineup. How are you feeling about everything right now?

Having the first record with [guitarist] Wayne [Lozinak] in the band, having gotten past [members leaving] and moving on, fans are acclimated to him. We are in a good spot. Anytime you lose a member, you have people speculate and want to make your real estate worth less. It's not the same; that's obvious. It's supposed to be different. Anyone that was butt hurt by [guitarist] Sean [Martin] leaving the band is over it now. With time, it's nice and we've maintained. We have a record that's better than the last one.

The last record, the self-titled release, was certainly not the most favorite among the fans, since it strayed a bit from the Hatebreed formula, which always worked so well for you.

From the last record, we only have four songs from that song in our live set. With Supremacy, we have seven or eight songs always in the set. Same with Satisfication, there is usually four or five songs From Perseverance, there is usually always four. From The Rise of Brutality, there's always like seven songs.

Watch 'Put it to the Torch' Video

What about the new album? How much room is there for those songs in the set list that's already numbering at like 30?

We'll be dong 25 to 30 songs and I feel like with the new record, we can probably play five or six songs that will go over really big.

The first taste was "Put It to the Torch," which is vintage Hatebreed: compact and efficient, making you want to beat up people, then play with kittens! It gets the red out!

That was the song that we all felt borrowed from previous Hatebreed records. That's the best thing fans can say -- that it sounds like Hatebreed. It's like if you are not a fan now, you never were. If you like the band and what we do, you can relate to the song. If you hate the band, it's about you.

You've said Wayne did a great job with this record and added his skills. It's nice for longtime fans, since he was an original member.

That is why it is the best move. Instead of having to reassign a position to someone we don't know, or to try to introduce a new person into a band of guys that are not the easiest bunch to deal with, he was there. He was our tech. He is back, but it's coming on four years, so it's old news.

I look at Hatebreed, at this point, like it is bigger than any one member. It's like a sports team. If someone leaves the team, it's not still the same team. The past members are in the Hall of Fame, even if not on the current team.

It seems like you've refocused your energy towards Hatebreed, since you were always spread so thin, doing Stillborn and all.

The people don't buy music anymore or support smaller bands. It has helped me, in a weird way, this dark place for the music industry as a whole. The silver lining for me is that I can focus on Hatebreed. I don't do the label anymore.

Why did you put the label to bed?

Making the same mistakes over and over is considered insanity. As much as I want to help young bands, the fans themselves don't buy this product – shirts, CDs or whatever. There are not a lot of people looking for new music; it's oversaturated. I was losing money and working hard, but getting nothing out of it. I am focused on Hatebreed. There will always be other labels who can put out this stuff with a staff of people. I have to focus on what I love doing.

And fans still care about the band and you can still continue to make music you love!

The silver lining to a very dark cloud is that I still love making music and writing lyrics and recording music. That is what I was feeling when I was 19 and recording Satisfaction. Nothing has changed for me. I still have the passion and drive, and do it regardless of possibility of making money. With the label, when you are losing money, thousands of dollars, that's very eye-opening. It's nice to not be losing money. Making money has not nothing to do with it, since I would put it back into the label. But I was only losing it.

Hatebreed are so well known for your lyrics...do you have personal favorites or an inkling to what are fan favorites, besides the obvious "What I have in my heart I'll take to my grave" or any part of "I Will Be Heard."

Most tattooed lyrics are from Supremacy and from the last record. I see more "Born to bleed, fighting to succeed tattoos" than words from any other record. I want to make an impact and do something that has more meaning. It's an honor when someone wants to wear it on their body for the rest of their life. So for me, "In Ashes They Shall Reap" and then, maybe, "Honor Never Dies," off the new album. That song isn't out, and people saw the titles on iTunes and tweeted me that they had a feeling they'd get them tattooed already.

What are you favorites to play at this point, since you've been playing them all for so long?

"I Will Be Heard" and "Before Dishonor" and "To the Threshold" are all meaningful to me. I love playing them every night. That's a good position to be in. There are no embarrassing moments in Hatebreed's career and I'd like to keep it hat way.

There formula works and you don't need to stray or get experimental.

With the last record, there was this intense pressure by everyone, not just the fans, but by everyone, saying "Expand, progress, change." Critics were saying that. At the end of the day, I am happy we did incorporate different stuff. Like "In Ashes" is the slowest, grooviest song, and a couple lines of vocals that are sing-y, so when that came out, it split the camps in a way. Some people thought it was awesome that we were trying something new, and it is a huge hit in the live show. But a lot of people thought, "Why the fuck, are they changing the recipe?" We learned. That record was great for us. We learned you can't please everyone, so please yourself. 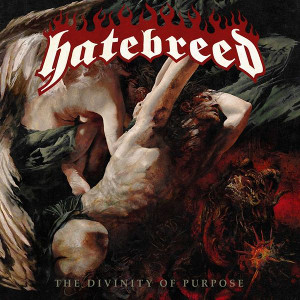 Hatebreed's The Divinity of Purpose is available now on iTunes and Amazon.