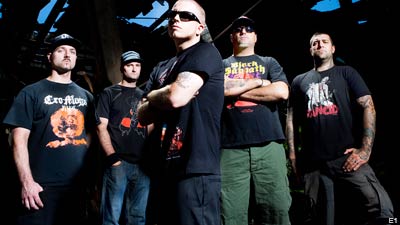 This exclusive premiere of Hatebreed's 'Everyone Bleeds Now' captures the band in its most vivid setting: live. And while most of this Connecticut institution's videos feature some sort of live shots, this is not just another video with live Hatebreed footage. While there is the requisite performance -- and Hatebreed live shows are the stuff of legend, like a field of live landmines going off -- the claustrophobic, straight-ahead shots of Jamey Jasta singing in a narrow hallway, all the while making eye contact with the camera, give the video an artsy, ominous, urgent feel that isn't generated by the music.

My favorite part? When he barks, "Everyone f---ing bleeds now" and runs his fingers across his throat like he's slicing a jugular -- then the band proceeds to launch into a breakdown so severe it should be admitted to the local mental hospital. The song and the video are vintage Hatebreed. There are a few pyro and smoke shots, too, illustrating the 'Breed's stepped up production on tour.


Is it just me or does Mr. Jasta channel Suicidal Tendencies' Mike Muir with his low-slung bandana? Even if it's unintentional, it's a nice nod to a West Coast hardcore legend.

Get your mosh on with 'Everyone Bleeds Now,' which appears on the band's self-titled, latest release.