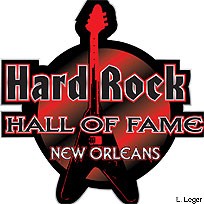 Your first question might be: Why have a Hard Rock Hall of Fame when there is already the Rock 'n' Roll Hall of Fame? Well, for one, while we love her, Madonna -- a pop star, not a rock star -- was inducted in the the Rock Hall, something that many dyed-in-the-wool rockers were appalled about.

The non-profit organization started in 2009, and executive director Billy Henrickle told Noisecreep, "Our mission is to honor and recognize great achievements in hard rock music. We will function much like other music halls of fame." The group is working on hosting its first annual inductee ceremony for 2011.

Henrickle continued, "Our long-term goal is to build a museum in New Orleans. One thing we are doing different is including musicians and their opinions. Musicians will actually vote to induct musicians, something the big HOF does not allow. We want to be the voice for tons of hard rock musicians overlooked by the other HOF."

While the Hard Rock Hall of Fame invites bands and musicians to be included in voting so their voice is heard, the site also interviews artists to build relationships and get them behind the cause. "We don't ask for donations. Sometimes we ask them to perform," Henrickle said.

The Hard Rock Hall is headquartered in New Orleans, an incredibly musical city. "All of the founding members live in New Orleans. We feel if the HOF can make it in Cleveland, New Orleans is one of the most visited cities in the U.S.," Henrickle said.

Henrickle said the site will be revamped soon and that the organization just hosted a benefit, helping them raise funds and allowing it to progress.