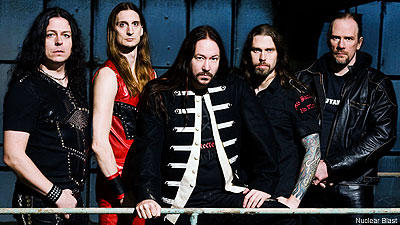 Power metal is a polarizing genre. People love it or hate it, as it borders on self-parody, simply due to the style's bombast and large, sweeping, epic nature. Sweden's Hammerfall make music that can be categorized as power metal -- but they have serious beef with the phrase.

"I've never seen Hammerfall as anything other than a heavy metal band," guitarist Oscar Dronjak told Noisecreep. "When we began playing this music, heavy metal was an outcast style. If you played heavy metal, you were a dork. And we suffered through that phase for a bit, but like Manowar, we held our heads high and said, 'F--- off.'"

When power metal started to rise to prominence as a viable sub-genre, fans and critics placed Hammerfall in the power metal classification. "That didn't sit well with me, since we were always a heavy metal band," Dronjak said. "Power metal is limited in what you can do with it and we might have been what people call power metal now but we are much more versatile. We apply the same principle, but it's more varied. I resent the term 'power metal,' so I make a point of correcting people when they use it."

The reason he resents the phrasing has to do with trash talkers on the web. "Every time there is an article about Hammerfall online, people always comment that Hammerfall is 'so gay,'" Dronjak said. And he (and the trash talkers) aren't making a sexual orientation comment, obviously, by using that phrase. "Without fail, it seems that if you like hard, extreme music, you think that everything that is not hard and extreme is gay," Dronjak continued. "Why do people do that? I don't know. Maybe they feel better to look down on something.

"But it's a fact. American extreme music is based on aggression, rhythm and very little clear vocals. And maybe that is people's main problem with Hammerfall, since our vocals are not aggressive and people can't get past that. I can't change people's minds. If they want to be narrow-minded, it's their loss."

Hammerfall on tour in the U.S. and 'No Sacrifice, No Victory' is in stores now.