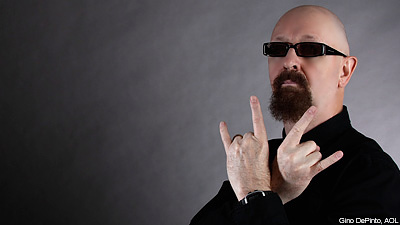 Even as the members of Judas Priest plow through promotions for the 30th anniversary of the release of their legendary 1980 album 'British Steel,' which is being celebrated with a special double CD and DVD set (out May 11), frontman Rob Halford continues to think ahead to his own solo projects.

"I am excited to re-introduce the Halford band to the Metal fans in Canada this summer," said Halford. "We are looking forward to performing a strong set and unveiling a new track for the Montreal Heavy MTL Festival."

Tickets for the show and additional details will available soon at www.heavymtl.com and www.RobHalford.com.

In addition, Halford have three new releases pegged for the coming months. On June 21, the double CD soundtrack 'Halford -- Live in Anaheim' will be released, followed on July 12 by 'Halford Crucible -- Remixed & Remastered' ('Crucible' originally came out in 2002). And on Aug. 3, look for the DVD 'Live in Anaheim,' a 23-Song, two-plus hour film documenting the creation and release of 'Crucible' and the subsequent tour. The DVD features songs by Halford, Fight and Judas Priest, including 'Golgotha,' 'The Heretic,' 'Into the Pit,' 'Painkiller,' 'Rapid Fire' and 'Never Satisfied.' Also featured are bonus tracks from Halford's February 2003 shows in Tokyo, Japan.