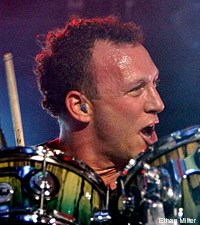 Guitar Center is looking for the next great musician who sits behind a kit! The retailer has announced its star-studded lineup for the Drum-Off '09 Grand Finals, which is the search for the next great undiscovered drummer. Over 5,000 drummers tried out and the five best will battle it out in the Grand Finals which will be held at The Wiltern in Los Angeles on January.

The cash and prizes? A whopping $35,000 in cash, prizes and endorsements. But the winner's participation in a once-in-a-lifetime spectacle at the event called 'Bezerk'? That's priceless. 'Bezerk' is an exclusive project put together by Tommy Lee that will feature Chad Smith of the Red Hot Chilli Peppers, Matt Sorum of Guns N' Roses, Velvet Revolver, Jose Pasillas of Incubus, Sully Erna of Godsmack and many others. The historic night will also include a tribute to John Bonham by Jason Bonham and a collaborative performance by Danny Carey of Tool and Brann Dailor of Mastodon.

Jan. 8 in Los Angeles will certainly be a drummer's wettest dream!