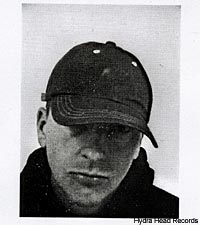 If you like the musical-landscape-mixing melodies and heavy drone of Justin Broadrick's main gig Jesu, he has a warning for you in regard to his newest musical venture Greymachine.

"I am making it an issue of warning people that are fans of Jesu, especially those that only listen to Jesu from my work, to approach with extreme caution," Broadrick sternly told Noisecreep. "I didn't want this project promoted in any way off of the name of Jesu because I'd like people to be informed that if you were into Jesu first, this is a million miles away to be honest. And that was obviously the intention."

Greymachine's intention, as Justin described it, is "to prove that I have not lost any of that zeal for extremely hateful sounding music". It's been some time since Broadrick has been associated with aggression, despite beginning his musical career with Napalm Death and founding the industrial Godflesh. However, Greymachine is his path back to all of that.

"My roots are still in a very extreme music and how much I immersed myself in sour full melodies and songwriting and texture and I still have it in me to return to my roots and make extremely nihilistic hateful music," he evoked.

When Broadrick left Godflesh and started Jesu, he lost many fans who expected the same heavy direction. But the idea of melodies over layered guitars was always something he loved. He just didn't know how to convey that early on. "It's funny, when I was growing up I was attracted to extremely brutal music and pop music for the melody," Broadrick explains. "But I think that because I began making music at such a young age it was almost impossible for me to convey these melodies, so I went straight to the brutal music. And I think that's why I moved on with Jesu."

Broadrick never felt bad about the fans who didn't follow him into Jesu, saying, "I had no intent in satisfying old fans. For me Jesu was meant to be no compromise in what I was trying to achieve." In that same spirit, it's now time for many Jesu fans to plug their ears thanks to Greymachine's dissonance – the tides have changed.

Greymachine is not just Broadrick on his own, though. It's also the work of Dave Cochran and Diarmuid Dalton – both who have worked in Jesu – and Aaron Turner of Isis. "The Greymachine is such a blast that I thought it needed more layers apart from what I had begun with," Broadrick recalled. "Which is when I thought to mention it to Aaron Turner, because he's always been saying to me, 'S--- man. We need to do something together at some point.' I just sent Aaron a couple of tracks and asked, how do you fancy getting on this? He immediately loved it and had a myriad of ideas. And obviously when he heard it he knew this had nothing to do with Jesu."

Broadrick laughed a bit when asked to explain how the full-length 'Disconnected' sounds. "The whole album is very unforgiving," Broadrick intoned. "It sounds like an ultra-mad, brutal cacophony, but it's actually really quite structured. It's the way that these things are put together that creates something really gnarly. It covers different tempos. It's all about textures and I don't think there is anything on that album that isn't dissonant." And with a rigidness accompanying his British accent Broadrick added, "There are no use of harmonies."

'Disconnected' will be arriving in stores August 4th in a packaging of metallic printing and a Vellum cover that will act as the final warning, there is nothing ethereal here, only hate.