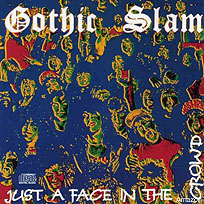 Gothic Slam formed in 1984 as part of the fledgling American thrash scene. The band's blue collar work ethic quickly found them a loyal local following in clubs like L'amour's in Brooklyn, N.Y. and Studio One in New Jersey. The folks at Torrid Records snatched up Gothic Slam a couple of years later and released their debut album, 1988's 'Killer Instinct.' The record's lead off track, 'Skankin,' received ample airplay on underground radio stations like Seton Hall University's influential WSOU, and not surprisingly, the worldwide metal community started taking notice of the band.

1989 should have been a banner year for Gothic Slam. The thrashers were set to release their sophomore album, 'Just a Face in the Crowd,' and this time they would have the marketing push of Epic Records behind them. Things didn't quite pan out for the group.

Though their video for the single 'Who Died and Made You God' got support from MTV's 'Headbanger's Ball,' the album failed to connect with the size of audience that the higher ups at Epic expected, and the band slowly disappeared off the metal scene's radar.

It wasn't for a lack of great material. 'Just a Face in the Crowd' is packed with riff parties such as 'Feel the Pain' and anthemic tracks like 'Battered Youth' and 'Demented Obsession.' Daniel Gomez leads the charge with a soulful vocal style that also blended in higher-pitched shrieks when the moments called for it. There is plenty of stuff on the album to get excited about -- and over 20 years later, it sounds just as potent.

Noisecreep found Gomez and asked him to tell us about 'Just a Face in the Crowd,' and what happened to Gothic Slam after it didn't make them household names.

Your first album, 'Killer Instinct,' came out on a small indie label, and you weren't that well-known outside of the New York City and New Jersey area. So how did you end up signing with Epic Records for 'Just a Face in the Crowd?'

Well the indie guys that put out our first album, Torrid Records, teamed up with Epic Records. They did it for the huge distribution that they offered. So for 'Just a Face in the Crowd,' we were suddenly part of that machine.

Once you were part of the Epic promotion machine, what was the feeling like within the band?

It was definitely positive, but then the reality of everything hit, and it got a bit stressful. All of a sudden, you have to deliver, and there's always another band right behind you. Either way, the music business is shady.

Did you approach the songwriting any differently? Was there any pressure from your A&R guy to write something that could possibly crossover onto modern rock radio?

Yes, there was some pressure coming in from the label, but we didn't give a f---. We just wrote and recorded what we enjoyed playing. That's probably why we aren't around today [laughter].

'Who Died and Made You God' is in the company of other fine heavy metal anti-establishment anthems. What inspired the lyrics, and did the band know it had something special on its hands?

Not at the time -- we were just being us at that time and moment. That was a period of time in metal when you were saying something real. It was much more than just partying and chicks for us. We wanted to talk about social issues. I wrote the lyrics to 'Who Died and Made You God' because I used to be a bike messenger in New York City. I would deliver to these stuffy offices in Manhattan, and the suits there would always make comments about my long hair -- things like that. People could be so ignorant. That's what made me want to write the words to that song.

The video for that song actually got some decent airplay on MTV's 'Headbanger's Ball' when it was released. Did you notice attendance at your shows get better as a result?

Hells yeah dude! We were so glad the attendances at our shows grew. Getting so much airplay on MTV during the original run of 'Headbanger's Ball' is our crowning achievement.

Listening to the songs on 'Just a Face in the Crowd' now, which ones stand out for you?

The song 'Keep the Faith,' since it's the motto I live by to this day.

Your cover of Thin Lizzy's 'Thunder and Lightning' was a real surprise, but it fit on the album really well. Who had the idea to include that on the record?

The guys at the label and our bassist JT were huge Thin Lizzy fans. I wasn't really that into the song, but now I'm glad we did it. I learned a lot about Thin Lizzy from the experience, and they were a great band.

How was it working with Rob 'Wacko' Hunter? Was he your first choice for producer?

He was working at Pyramid Sound with Alex Perialas (Testament, Vio-Lence), but he wasn't our first choice at the time. He was a very cool cat and British, which at that time I had never met anyone from there, so it definitely was different [laughter]. He did a great job on the album, and he taught us a lot. It was such a beautiful experience for me.

A lot of people I know complained about the album cover for 'Just a Face in the Crowd' when it came out. What are your thoughts on it?

Really,– I have never heard any complaints. Actually, everyone I have spoke to about it have loved it. The cover wasn't just us posing or some fancy image. We kept it real and got our friends in on it. That's hardcore. That's the definition of true metal. We shot the photo for the cover at a classic metal club in New Rochelle, N.Y., called Streets.

It seemed like the label really dropped the ball on the entire project, in terms of the marketing and publicity side of things. Would you agree?

Yes, I would, but it was between the guys at Torrid, who didn't have much money, and Epic Records, who had so many bands that they wanted our indie guys to do the leg work. So we got lost in the sauce.

Once your promotional commitments for 'Just a Face in the Crowd' were finished, did the band write new material?

We were always writing new songs, but by that time the stress of everything had gotten to us. I guess you can say it was a very Spinal Tap kind of situation [laughter].

What brought on the dissolution of Gothic Slam? Outside of Dave Chavarri joining bands like M.O.D. and Ill Nino, the rest of the guys seemed to disappear from the metal scene.

Well as usual, money is the root of all evil my friend. Well, I never stopped pursuing music, and have played in many projects throughout the years. I've played in other projects, and my own solo stuff locally, but I could never get the right band together. As you get older it gets harder to pull it off. People have more responsibilities, so it's a pain. Growing up sucks -- I'm glad I never did [laughter]. The rest of the guys in Gothic Slam did projects, but eventually stopped trying chasing mainstream success. I had not spoken to them a few of them for the longest time, but since Facebook, we have all reconnected.

Would you be game for a Gothic Slam reunion show sometime in the near future?

Sure, I'm definitely down. But someone better get me some food and drinks or they can forget it [laughter].

You have a new band called Ghetto. Can you tell us a little about that, and when we could expect some new music?

Well, it's not really that new. I have been doing it under different names, and players, throughout the years.

It's tough to describe, but I'll just call it heavy soul metal for now. You can check it at myspace.com/ghettotrendkiller.