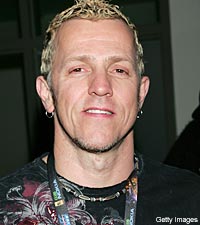 Ax-slinger Gary Hoey is good to his supporters. When a Noisecreep contributor asks about the set list for his annual Ho! Ho! Hoey Rockin' Holiday Tour, he plays a private concert over the phone with some of the highlights of this year's jaunt.

"We're doing this one here," he said before breaking into an instrumental version of the '12 Days of Christmas.' He cuts off that song and slides effortlessly into 'You're a Mean One, Mr. Grinch.'

"We're doing about 10 Christmas songs and we're also doing my first big hit which was 'Hocus Pocus,'" Hoey said. "We're doing another hit I had, which was 'Low Rider.' People love that one."

Hoey's travels will take him across the United States until he reaches San Juan Capistrano, Calif.'s The Coach House on Dec. 19. The Ho! Ho! Hoey Rockin' Holiday Tour and his corresponding on-air radio station visits have become a staple each holiday season. His tour has become so successful that it has spawned a series of Hallmark musical greeting cards that feature Hoey classics.

Hoey said growing up in a six-child household in Lowell, Mass. inspired him to create his tour and his series of holiday CDs.

"I definitely have a lot of great memories of Christmas growing up," Hoey said via telephone from his New Hampshire home. "It was definitely a big thing for my family, being one of six kids. I have two kids--I can't imagine having six. My mom was really big on the Christmas music, playing her LP albums. She used to play Elvis, Bing Crosby, Frank Sinatra, Tony Bennett. They were endlessly playing.

"She would be playing Elvis and it would be skipping and she wouldn't even know it would be skipping. I just remember this one year, I heard, 'I'll have a blue, a blue, a blue, a blue, a blue' and she's over there drinking her beer and decorating her tree. My mom was a partier. She used to like to have her beer and smoke her Pall Malls. She's a doll. My mom decorated the tree and the funny thing was she used to put up so many decorations that, by the time she was done, you couldn't see any green. It was garland, bulbs lights and she would always tell us we could help decorate it. But every time we'd try to help her, she'd say, 'No, no, no, no, no, no. Don't put that there. Put it over here.' She pretty much dictated everything we did. In the end, it was her creation."

Those experiences, along with braving the tough East Coast winters, make Hoey the perfect person for his job. "I definitely have the background to be Mr. Christmas," he said with a laugh. "I also lived in [Southern California] for 17 years. Having no snow on Christmas -- t was kind of strange. There's no shoveling. There's no ice. You don't slip and fall."

On his tour, Hoey has brought joy to charities such as the Connecticut Children's Hospital Metal Health Concerts (2006, 2007 and 2008) as well as auctioning himself off for private guitar lessons to support the New Hampshire Food Bank's 'Lend A Helping Can' food drive four years in a row raising more than $5,000 for families in need. He also supported Toys for Tots with the Marine Corps and his guitar auctions for the Boys & Girls Club in Visalia, Calif., for 2007 and 2008 have raised more than $25,000. He encourages fans to bring canned goods to his shows to support food banks.

"We do that when we can," Hoey said. "Usually when I say that, I ask them to bring me a cheeseburger and fries. I'm hungry, too."