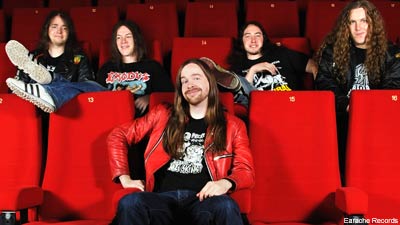 In a time of recession, the Ireland thrash outfit Gama Bomb wanted to make the follow-up to their 2008 release 'Citizen Bomb' so available to their fans that they're giving it away -- for free! In a partnership with Rapidshare, the world's leading online file hosting company, their new album, 'Tales From the Grave in Space,' is a free download starting yesterday.

Fueled with 12 tracks of speed metal fused with classic thrash melodies for both fans young and old, be sure to obtain your copy now. Produced by Scott Adkins (Behemoth, Cradle of Filth) the new album captures both the sound and spirit of old school thrash and this release alone will be innovating new school applications to get the music out to listeners faster and easier than ever before.

As well in support of this new release, Europeans will have the opportunity to check them out on the road starting today on their headlining tour beginning in Huddersfield, U.K. and rolling through until mid-December.