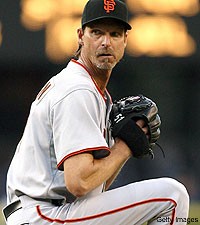 Pitcher Randy Johnson, who spent his career dominating the rotations of the Seattle Mariners, the New York Yankees and the Arizona Diamondbacks, to name a few, with his wicked fastball, has another love besides America's pastime. The long and lean lefty -- he's two inches shy of seven feet tall -- is an aspiring photographer! He retired in January of this year and is spending his first summer free from batters, pitch counts and a 160-plus game seasons pursuing his other passion. He hopes to start publishing his work, too.

"This is my first summer available to go to shows, since I spent the last 26 years playing baseball, so my time was limited," Johnson, who was nicknamed 'The Big Unit,' told Noisecreep, fresh from shooting Iron Maiden and Dream Theater. "I have four kids and there is usually there is a concert in Arizona I can go to! I've enjoyed music forever, and photography, so one plus one! I envy these photographers that shoot for the bands, taking great pictures, having total access and getting them published."

For Johnson, the pinnacle of all rock shows he has been to "is probably the '02 Zeppelin reunion! I met Jimmy Page and Robert Plant, so that's the pinnacle of any concert," he said. "I am working my way down from the top of the mountain!" Johnson also went on the road with his friend Geddy Lee from Rush, who is a baseball fan. "I met him 20 years ago and I went out with them on tour and traveled with them for three or four shows a few years back," Johnson said. When asked how it was on their bus, Johnson laughed, "It was on their plane. We were hanging out. It was back when I was playing baseball without a lot of free time to take pictures. They are my friends. I am a fan but a friend, too, and I hang out as a friend."

Johnson has watched plenty of bands sound check and has seen Metallica a bunch, saying, "I've met James a few times and hung out with him." He contends that "it is easier when they know who you are and are not part of a radio station giveaway." He also said he liked to talk shop with Thayil and Lee. "They are all down to earth," he said. "I've had an appreciation and a mutual respect. It's a great tie, that my profession let me meet people I listen to in my car!"

Regarding that 'grass is always greener' bit between athletes and rock stars, Johnson points out the parallels are a result of mutual respect."I play drums a little so I can appreciate how good [Rush's] Neil Peart and [Dream Theater's] Mike Portnoy are. They are elite drummers," he said.

So if you are a photographer in a photo pit at big rock or metal show and you bump into a tall, lanky guy who looks like Randy Johnson, chances are, it probably is Randy Johnson!